The wasp and all his numerous family
I look upon as a major calamity.
He throws open his nest with prodigality,
But I distrust his waspitality.--Ogden Nash, "The Wasp"
by El Cabrero No comments:

In Robert Reich's Aftershock: The Next Economy and America's Future, the author makes some interesting points. He sees the static or dwindling share of income for middle class and low income Americans to be a driving force behind the nation's economic problems. Since the late 1970s, incomes have been pretty much stuck for all but the wealthiest Americans.

Those outside of that happy circle had to cope as best they could with a changed reality that included a minimum wage that didn't keep up with the cost of living; assaults on unions; tax cuts for the wealthiest; shifting budget priorities; etc.

People coped as best they could as they tried to make up for stagnant incomes. Coping mechanisms included:

*more women entering the paid workforce. That's been pretty much maxed out.

*drawing down savings and borrowing heavily. That didn't work out too well and isn't much of an option now.

Given the skewed priorities of those driving the agenda in Washington, things are likely to get worse, minus the coping mechanisms.

There's more about the book here.

GOVERNMENT BY PEOPLE WHO HATE YOU, CONTINUED. The House Republican plan to block grant Medicaid and related proposals (including the budget cap supported by WV's Joe Manchin) is going to hit seniors hardest of all. Seventy percent of people in nursing homes rely on Medicaid since even middle class families run through savings and assets quickly in such circumstances.

DENY THIS. Floods and extreme weather events keep piling up, even while politicians continue to deny climate change and/or block actions to deal with it.

DEFINITELY DENY THIS. From Coal Tattoo, here's info on yet another study of the health effects associated with mountaintop removal mining.

Tell it to your grandmother

There is a school of thought when it comes to writing that the goal is to make things so clear that one could explain it to a grandparent who was unfamiliar with the issue.

As an exercise, here's how I'd explain the current deficit/federal budget debate to one of mine (if any were still around).

Why do we have big deficits?

1. Because of the Bush tax cuts, which went disproportionally to the wealthy. (Solution: end them, or some of them anyhow);

2. Because of the wars, including particularly the Bush administration's war of choice in Iraq. (Solution: see above, minus the qualifiers.)

The Recovery Act and TARP were temporary programs designed to end the worst downturn since the Great Depression. And they kind of did, at least as far as helping the economy to grow again. We would probably be in better shape as far as jobs and economic growth go if the Recovery Act would have been bigger or more targeted to direct job creation.

In fact, Nobel Prize winning economist Joseph Stiglitz has argued that the first priority should be getting Americans back to work.

4. Because of the rising cost of health care. The Affordable Care Act has provisions that will help in this, but more needs to be done. Republican plans to gut Medicare, Medicaid and CHIP would do nothing to address health care costs--they'd just pass them on to consumers.

One more question: Why did we have the recession? My short answer is that we owe it to a lack of regulation in the finance sector of the economy. And the big dogs on Wall Street are the same drunk drivers asking to borrow the car keys again.

Final thoughts: seniors on Medicare aren't the problem. Nor are elderly or disable people or children on Medicaid. Nor are college students who receive Pell grants. Nor are families who rely on food stamps to get by. They didn't cause it and they shouldn't bear the brunt of dealing with it. 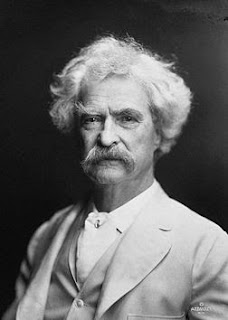 Just think: if Mark Twain had never existed, Americans would have either had to find other people to attribute clever sayings to or else come up with clever sayings on their own.

One that has been showing up a good bit for some reason in the last week may or may not have been something he really said:

"I've never wished a man dead, but I have read some obituaries with great pleasure."

(A very similar quote has been attributed to attorney Clarence Darrow.)

WHO'S TO BLAME for a shaky economy and deficits? The elites, not the folks in the streets.

MEDICARE SHUFFLE. It looks like congressional Republicans, after getting a little love at town meetings in their home district, are backing away from Paul Ryan's plan to gut Medicare.

CAPPING THE CAP. Here's a good op-ed from the Charleston Gazette opposing the spending cap proposed by some in Congress, including, unfortunately, WV's junior senator.

MORE THAN A YEAR after Massey's Upper Big Branch mine disaster, family members are disappointed by congressional inaction on mine safety.

DENY THIS. Climate change may be affecting global food production.