My wife told me to blog this

I received a direct order from the Spousal Unit to blog about a story in the news regarding the production and distribution of what El Cabrero's beloved state of West Virginia seems to regard as a dangerous and toxic substance, to wit, milk.

We have dabbled a bit in dairy at Goat Rope Farm, but it's hard when milk from non-industrialized (i.e., non-tortured) animals has roughly the same legal status as, say, nuclear waste or crack.

TWO TATTOO. My friend Ken Ward at Coal Tattoo was off last week, a busy week in coal news. But he's making up for lost ground this week. Here's his coverage on the latest climate change information for WV's ruling class to deny because of money and, closely related, here's his post on said ruling class's ongoing hissy fit over the EPA.

ON THE BRIGHT SIDE, at least WV's two senators voted against the Whackadoodle blackmail bill that threatens to shut down the government unless "Obamacare" is defunded.

FINAL THOUGHT. I love this tweet from Riann Wilson:

Things to say when you sit next to a stranger on the plane:
1) God put me next to you for a reason.
2) Are you ticklish?

I think I'll try that next flight. 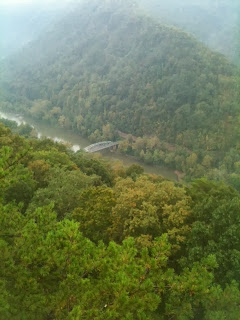 Yesterday, I took a visiting friend and co-worker to see some of my favorite parts of the state, which are around the New River Gorge area. (It seems like the only time I get there is when I'm doing that.) It struck me once again that the three necessary elements of any self-respecting WV scene is the obligatory combination of mountain, river and railroad track. I think of them as the Appalachian trinity.

MAKING  A SPLASH. Several legislators got an earful yesterday when members of the Our Children Our Future campaign to end child poverty in WV visited the capitol. Read more here.

BETTER OFF? Lots of people will be under the Affordable Care Act.

Given the fact that the Affordable Care Act seems to be driving some members of Congress to foam at the mouth and howl at the moon, it seems appropriate to highlight a couple of voices of sanity on the issues. The first is my friend Perry Bryant with West Virginians for Affordable Health Care and the second is with Dan Foster, a doctor and former member of the WV state senate. Check them out here and here.

WEST VIRGINIA'S COLONIAL MASTERS deny climate change because of money. OK, whatever. But get ready for some nasty storms.

I wish I said this

My Spousal Unit isn't on Twitter. It is very unlikely she ever will be. But this evening, while talking about how useless Twitter seems to her, she came up with a near-perfect Tweet. Here it is:

"They don't hate us for our freedom. They hate us because we use our freedom to look up cat pictures."

(I'm not sure she's totally innocent on that score.)

HUNGER GAMES. Here's Krugman on the US House's cuts to the SNAP program, aka food stamps.

WHO'S ON WELFARE? Here's a look at the subsidies the average US taxpayer gives to big business.

THEY'RE NOT PRETTY ON THE GROUND EITHER. Here's a scary look at satellite images of factory farms.

There is plenty of serious stuff to blog about...and I intend to resume doing so. Tomorrow. 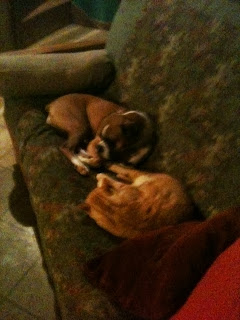 For tonight, at least it's nice to live in a world where cats and dogs, occasionally, lie down in peace together. 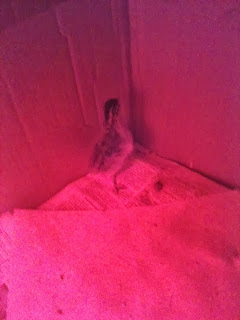 At Goat Rope Farm, it's been a tough week for guinea babies. Out of 11, only two survived. We're not sure whether the temperature or the food was wrong. The remainders seem to be thriving now on something like the Atkins diet, which requires some of us to go out and dig grubs and such with some regularity. 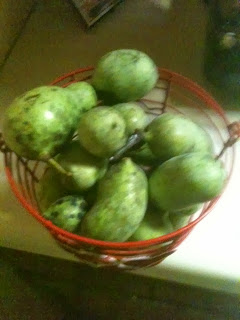 Finally, after going to Ohio last week to attend a Paw Paw Festival, we learned enough to spot this native fruit on our own land, where it turns out we have several hundred little trees.

Win some, lose some, start again. So it goes.