I have often heard it said that ideas have consequences. These days, that is true even when the ideas are wrong, as was the case when two Harvard economists published research recommending austerity measures as a way to promote economic growth. You may have heard that a graduate student from MIT found basic errors in their data which invalidate their claim. Their ideas have been used as justification for cutbacks and other austerity measures around the world.

I've been trying to think of a way to write about this that isn't too wonky. However, thanks to Stephen Colbert, that effort is no longer necessary. All you have to do is click here and here.
by El Cabrero No comments:

A lot of interesting items have caught my eye recently. First, El Cabrero's beloved state of West Virginia is, according to a Gallup poll, officially the most stressed state. Hawaii was the least. Maybe they ought to send us to Hawaii for a while and see how that works.

ONE POSSIBLY STRESSED WEST VIRGINIAN is a Republican legislator who suggested elementary kids should have to work for their meals, the poor ones anyway. Stories about the debate on the Feed to Achieve Act, when the comments took place have shown up on the Huffington Post and a Washington Post blog.


Here's what he said during the debate: "If they miss a lunch or they miss a meal they might not, in that class that afternoon, learn to add, they may not learn to diagram a sentence, but they'll learn a more important lesson."


AT LEAST OUR LEGISLATURE DIDN'T DO THIS. According to the Post's Wonkblog, Montana may have blown its chance to expand Medicaid because one confused legislator cast an unintentional vote. Doh!

HAIRY THUNDERER OR COSMIC MUFFIN? Another study suggests that people who believe in a punitive God are more likely to have emotional problems. And, I would surmise, to kill people in the name of that God.

Whilst driving to the glorious capitol city of El Cabrero's beloved state of West Virginia, I came upon a bumpersticker with a ribbon of indeterminate color and a picture of a set of brains. The caption read: "Support zombies."

FRIENDS OF WHOM? There is a good op-ed in today's Charleston Gazette by UMWA official and state Delegate Mike Caputo.  It asks a very basic question: where are the so-called Friends of Coal when it comes to supporting real coal miners who are at risk of losing promised benefits from Patriot Coal.

To state the extremely obvious, it's one thing to kiss up to coal companies and quite another to stand with coal miners and communities. 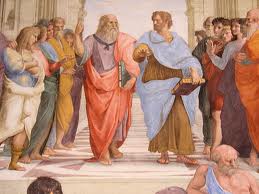 It has come to my attention that today is the birthday (or the day the birthday is celebrated anyway) of the great philosopher Aristotle back in 384 BC. He is pictured in Raphael's School of Athens beside his older teacher Plato. Characteristically, Plato point upward to the realm of the Forms while Aristotle points downward to the earth.

Dante called him "master of those who know" and I will say he did pretty good.

Speaking of Dante, thanks to the Spousal Unit, I am now a paid up member--I would say card-carrying member but they don't issue cards--of the Dante Society of America. I'm presuming that membership comes with a license to raise hell. Mine hasn't come in the mail yet but I guess I don't have to wait.

Congresswoman Shelley Moore Capito had an op-ed in the Gazette Sunday attacking the Affordable Care Act as unaffordable. With all due respect, I must point out that her past track record may compromise her status as an oracle.

For one thing, she had no problem with uncritically supporting the Iraq War. In fact, she was one of Bush's main cheerleaders. The cost of that war, by the way, is pushing $1 trillion dollars. And the cost in dead and wounded Americans is around 4,500 American military personnel and over 30,000 wounded. Estimates of Iraqi dead are all over the place but most estimate well over 100,000 slain. No sticker shock there.

As for the cost of lost revenue from the Bush era tax cuts, they were pushing another $1 trillion between 2001 and 2010 alone. Again, no sticker shock there.

I guess it's a question of priorities.
by El Cabrero 1 comment: