One step, then another 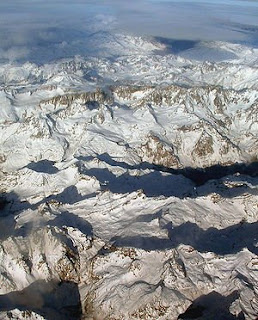 The Andes Mountains. Not the best place to crash land. Image courtesy of wikipedia.

The theme at Goat Rope lately is hard times and how to get through them, a topic to which I will return next week.

Speaking of which, if you think you've got troubles, I highly recommend Edward E. Leslie's Desperate Journeys, Abandoned Souls: True Stories of Castaways and Other Survivors. It is from that book that I came across the Best Advice Ever for dealing with tough times, one that I suggest committing to memory. It makes a pretty good mantra when you need it.

The words come from Henri Guillaumet, a pilot whose plane ran out of fuel in a snowstorm in the Andes. He managed (barely) to survive pain, cold and lots of other nasty stuff. Speaking from bitter experience, he gave this advice:

What saves a man is to take a step. Then another step. It is always the same step, but you have to take it.

LESS IS MORE. Getting by with less stuff may not be a totally bad thing.

MISTAKES WERE MADE. In this article, economist and Nobel laureate Joseph Stiglitz outlines the bad economic policies that led to the current mess.

LET THEM EAT NASTY STUFF. Some possible good news: bacteria that like to eat toxic gunk could help revive dead zones in the world's oceans.