A holiday we could use 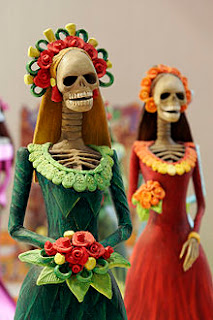 A Mexican custom of which El Cabrero is a big fan of is the Day of the Dead, which corresponds with All Saints Day in the Church calendar. Halloween, you recall, is All-Hallows-Eve or the day before. Similar customs are observed elsewhere, but it is the official Goat Rope verdict that this is the coolest.

The celebration likely has pre-Christian roots. During the Aztec month of Miccailhuitonli (say that 10 times while spinning around), there was a festival presided over by the "Lady of the Dead" which was dedicated both to children and the dead. Originally, this was celebrated in the summer, but there was an understandable post-colonial shift.

Now the festivities usually continue for the first two days of November and include acts that symbolically welcome the dead back into their homes and visiting family graves. There's special food including "pan de muerto" or bread of the dead. Family altars and gravesides are decorated with religious objects and symbolic offerings of food flowers and even alcohol and cigarettes.

I think the basic idea is right on, i.e. that the living and the dead are connected. That idea is enshrined in the ancient creeds of Christianity, which speak of "the communion of saints." 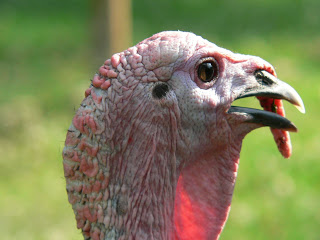 It is with sadness that I report the passing of Turklurk, the one remaining turkey on Goat Rope Farm due to natural causes...as in a predator. I found him this afternoon on returning from a long day. Not sure when the crime took place or who the culprit was. Whether coyote or raccoon or whatever it didn't eat much, which is to say a lot went to waste. 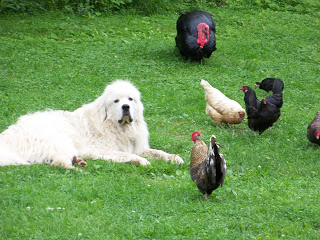 This never would have happened when Arpad the Magnificent, protector of poultry, was alive.

The life lesson here, apropos of nothing is that when the good guys go away the predators move in.
by El Cabrero No comments: