What Gaza could be

"But hell can endure for only a limited period, and life will begin again one day."--Albert Camus 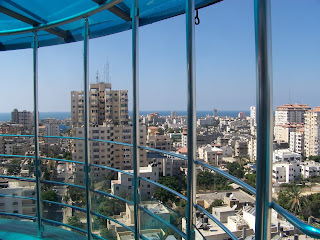 I've been blogging about Gaza the last few days. I could do more, but there are other places to discuss while they are still fresh in mind. But I have some things to say before moving on.

First, as a West Virginian, I know that even the down and out places in the world aren't down and out all the time. There is joy as well as sorrow among the ashes. Or coal slurry. I don't want those who look at this blog to think of Gaza as only a smoking rubble or place under siege. 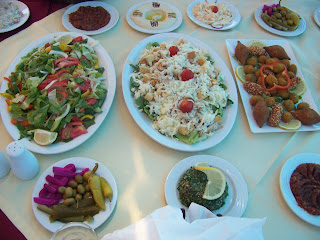 For one thing, I don't think I knew what feasting really was until our AFSC delegation came here. And damn...so that's what eating fish is meant to be. 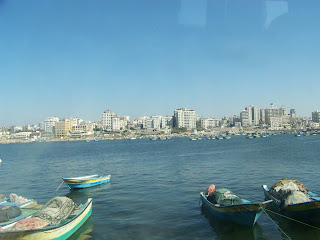 When Gaza's--and this entire region's--season in hell ends (inshallah), it could actually be a destination resort. 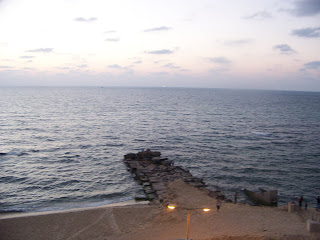 It would take a lot for that to happen.The UN recently reported that without rapid remedial action, live will become "unliveable" by 2020. 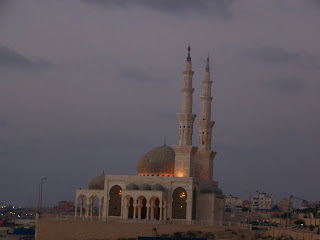 When our delegation spoke with young people in AFSC's program there, many of us became emotional about their plight. One of the young people spoke up, saying something like "Why do you cry for us? Despite all this we are living our lives."

Despite all the death and destructon, I wouldn't bet against life here.
by El Cabrero 1 comment: 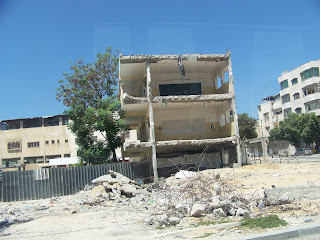 It's not easy get into Gaza these days. It requires a permit from the Israeli government. If you get that, there's a grueling checkpoint that involves inspections and questioning on the Israeli side, which can take a long time. Two other checkpoints follow, one by the Palestinian Authority and the other by Hamas. 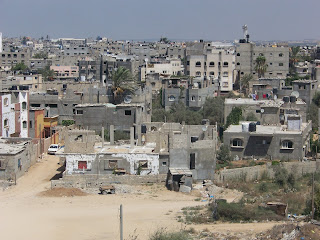 Our AFSC delegation went to a high point of the city to observe damage.

There was plenty of it. 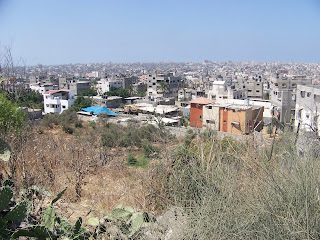 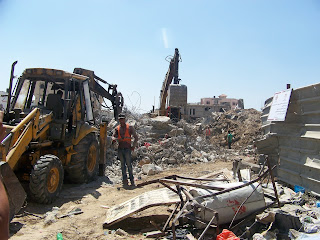 Still, people are trying to rebuild. 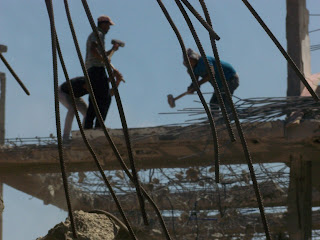 Money and new materials are scarce since the Palestinians have no control of their borders. 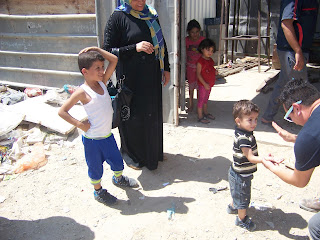 Still people go about the business of life. 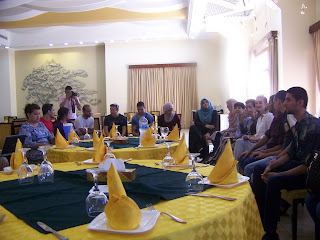 Young people in an AFSC program there work towards a better future despite incredible challenges.

I don't have any pictures to go with this, but one evening we met with a professor and his students who have published a book in English (that was translated into several other languages) called Gaza Talks Back. It was a great discussion, not only about the situation there but also about the power of writing and the love of language and literature. Particular favorite English speaking writers were Twain, Hemingway, and Dickens.

Not exactly what you might expect. But you can expect anything here.
by El Cabrero No comments: 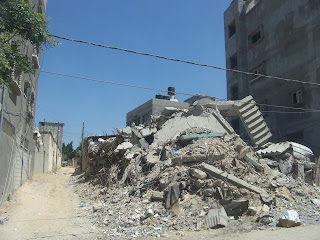 This isn't the whole story.

I'm not sure I'm up for this post. Aside from the fact that it's really late Jerusalem time, visiting the Palestinian region of Gaza was one of the most intense experiences I've had. I may not be ready to write much about it, but here's a start.

A little preface. Gaza has been called an open air prison and that's not far from the mark, although parts of it are really beautiful and full of life.You may recall that armed conflict broke out most recently between Israel and Gaza in the summer of 2014. According to the UN, those 51 days of conflict resulted in 2,200 Palestinian and 71 Israeli deaths.

Of these fatalities, 1,492 Palestinian civilians of all ages were killed. Israel lost  a total of 71 people, 66 of whom were military losses. It's late and I'm so tired that I'm not sure about my math, but I think that's around 31 Palestinian deaths to 1 Israeli fatality, with the understanding that one death is too many.

According to the UN, "Israeli attacks striking residential buildings accounted for a significant number of civilian casualties, raising concerns about respect for the principles of distinction, proportionality and precaution in attack under international humanitarian law (IHL)."

More on how it looks now to come.

It's not all shrines 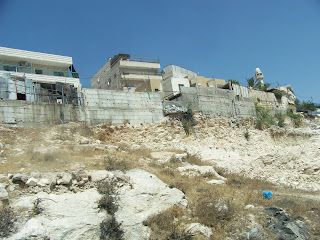 I've just gotten back from an overnight trip to Gaza and a day in Ramallah as part of an American Friends Service Committee to Israel and Palestine, but I'm not even ready to go there. The experiences were so intense I'll need some time to sort them out. Instead, I'd like to share some pictures from East Jerusalem. Yes, that would be the part that is mostly Palestinian, not counting settlements. 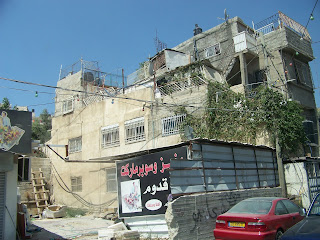 There's a bit of a contrast between the west and east sides of the city. Some differences may include things like a reliable supply of power and water and not having your house torn down. 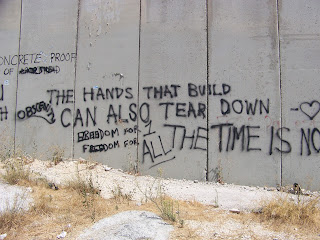 Then there's this eight meter high security barrier wall that started to spring up in the first half of the 2000s. 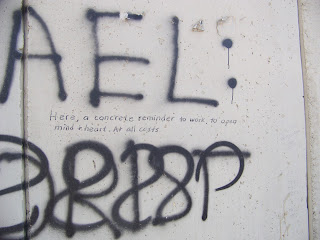 Sometimes you need to read the fine print. 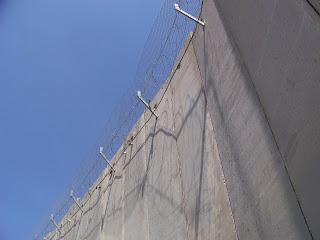