Of turkey love and random news 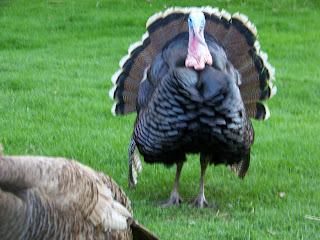 A romantic comedy has been playing itself out at Goat Rope Farm, where we now have two male and two female turkeys. The males are much too gentlemanly to fight but they spend a great deal of time displaying and following each other around to make sure their rival doesn't get a moment alone with the ladies. Still, somebody is getting somewhere since the females are jointly sitting on what appear to be 27 viable eggs. We're hoping at least a few make it.

Meanwhile, here are a few items.


CONFUSING AYN RAND WITH JESUS seems to be a problem for granny whacker Paul Ryan. The Jesuits cleared things up a bit.

BIG FOOD. Here's a look at how the corporate food system derailed the struggle against obesity.


WHEN RED WAS RED. A friend of mine just published a book on the history of the Socialist Party in West Virginia.

ANALYTICAL THINKING AND RELIGION may not go very well together.

For several months now, rumors have been floating around West Virginia about major cuts to child care programs for working families. If true, and I'm pretty sure something on that order is at least being discussed, I think it might be in the best interests of Governor Tomblin to reconsider.

For starters, unlike most states, West Virginia is not in fiscal trouble. It has enjoyed budget surpluses for the last several years, even while making major cuts in corporate taxes. There's no excuse.

Second, according to the Self Sufficiency Standard for West Virginia, child care costs for those who pay out of pocket can be astronomical. Depending on family composition and age of children, it can easily be more expensive than housing or food and much higher than tuition at a state college or university. Further, these costs hit families at a time when earnings are low.

Third, it's kind of hard to hold down a job if you don't have child care. Some people would have to quit.

Fourth, #3 might be an embarrassment to someone running on a "more jobs" platform. I imagine that his opponents could have a field day with that.

Sixth, there is a growing body of scientific evidence that early childhood care and education is vitally important for future well being and offers a major return on investment.

Seventh, I'm pretty sure...OK, I'm certain...that all kinds of groups around the state are ready to make loud bad noise about this and I'm pretty sure the media is interested as well.

It's one thing to accidentally disturb a hornet's next. It's another to deliberately kick one, which is something I generally think of as not a very good idea.

I hope the folks in power stop to think a little before they kick this one. 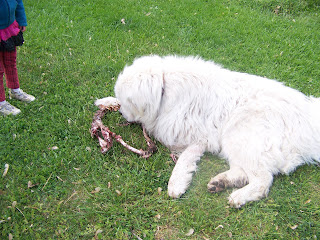 Some people are convinced of the generosity of the universe. They believe that everything was pretty much put there for their convenience. As a pretty strict Darwinian, I have my doubts.

But there is someone on Goat Rope Farm who has no doubts whatsoever. That would be Arpad, our (sort of) Great Pyrenees and general security chief. Arpad is about as close as you can get to a canine incarnation of the Dude on The Big Lebowski.

And he is utterly convinced that the universe set things up just for him. In his mind, further proof, if any were needed, came in the form of yet another  partial deer skeleton he he found in the woods which appeared at the proper time.

I really wish he was right about this.

FIGS. Here's the latest edition of the Rev. Jim Lewis' Notes from Under the Fig Tree.

BUT WHAT DID IT LOOK LIKE? An amateur paleontologist in Ohio found a weird sea beast.

Speaking in a foreign tongue

For the longest time, learning a foreign language seemed like an insuperable obstacle for me. I started with Latin in high school, but our teach specialized in telling stories about her life rather than the language in question. Then I tried French more than once in college. I really admired many French writers but it seemed at the time (and still kinda does) that the pronunciation system in that language was an elaborate practical joke.

As I mentioned before, eventually I made more progress with Spanish, although I adopted drastic means which I wouldn't recommend to everyone. To wit, I married a Spanish teacher.

Anyway, I got a lot out of it, aside from a new collection of cuss words and the ability to drive native Spanish speakers to tears in a matter of minutes. I think learning a new language does something new and kind of cool to the brain.

And here's some scientific evidence for that.

99% SPRING AND EVERYTHING AFTER discussed here.

For the record, I have never said that I wasn't an idiot. The following incident is yet another reason that I forgo making that claim...

I have this laptop for work that I use when I'm on the road. A while back I noticed that the wireless didn't work on it anymore. I figured it must be a virus or something. Anyhow, I finally got around to calling the AFSC computer help desk.

I explained my problem and gave the model number. Then, with great delicacy and patience, the person told me politely that there was a switch on the side of the computer that turned it on and off. Sure nuff, there was. I flipped it and it worked.

Would that all problems could be solved that easily. And that we didn't wait so long to ask for help.

AUSTERITY isn't much of a hit in Europe these days.

I try to be a fairly not too terrible person most days, at least when people are looking. But certain things unleash the beast within, effecting a Jeckyll and Hyde transformation in a matter of seconds.

One such thing is the game of Scrabble. Now it so happened that this weekend we had a house full of kids who  asked to play the game. One had played it before but two second graders, including my grandson, were new to the game. I explained to my grandson that in this family Scrabble is not a game but a martial art in which no mercy or quarter is shown to one's opponents. Although I didn't use these exact words, I indirectly implied something to the effect that the goal is to crush one's opponents and drink from their skulls, metaphorically speaking.

We played a game and I attempted to instruct the beginners and help them with their words along the way. But when the scores were tallied...what can I say? In Dylan's words, "I can't help it if I'm lucky."

The other adults present pointed out that I was exulting in the defeat of two 8 year olds and a 12 year old. I pointed out, however, that this is the same mathematically as defeating a 28 year old. Besides, it was Scrabble.

Which means it was on.

POVERTY, WELFARE REFORM AND EVERYTHING AFTER discussed here.

A HUNTING WE DID GO. Early humans, that is.