El Cabrero's ears picked up Friday when I heard NPR report on a federal criminal investigation of Massey Energy. Apparently the FBI has been talking both to Massey workers and to MSHA employees.

It does seem rather unusual for something like this to happen so soon after the disaster, although the investigation could well have begun with company activities prior to the Upper Big Branch disaster.

Here are takes on it from The Charleston Gazette, the New York Times and the LA Times.

The NPR report also suggests that the investigation also includes the possible bribery of mine safety officials, although other sources have not emphasized that angle.

I don't know where that will go, but I don't think it's unusual for people from the agency to retire and go to work for much higher pay in the industry, which may compromise the toughness of enforcement.
by El Cabrero No comments: 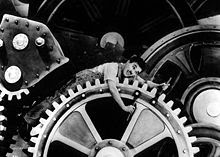 It seems like one of the lessons of history is that capitalism is an enormously powerful, adaptive, productive and often destructive system. It can accomplish amazing things--even Karl Marx sang its praises in The Communist Manifesto--but it has the habit of melting down every so often.

One reason why the system hasn't seen a meltdown as bad as the Great Depression of the 1930s (even though it's come close) is because of various reforms and regulations that have been enacted since that time.

Yet for 30 years or so, right wing ideologues who claim to be defenders of capitalism have been busy trying to undo the regulations and safeguards that help to stabilize the system--and they had a lot of success.

Yet when you consider that the wealthy and powerful have a much greater stake in it than anyone else, it seems odd to me that many of them have pushed for measures that would place it at risk.

It's like watching people trying to saw off the branch they're sitting on. The whole Goldman Sachs thing is a case in point. As E. J. Dionne Jr. wrote in a recent column,

Marx's predictions about the inevitable collapse of capitalism have been wrong so far because the system has worked reasonably well, thanks to the rules and redistributive programs established after the Great Depression.

The lesson is that the surest way to save capitalism is to regulate it in the public interest.

WHEN SORROWS COME, they come not single spies, but in battalions. The BP oil rig disaster that killed eleven workers threatens to eclipse the Exxon Valdez as an ecological disaster. Two more miners were killed in a Kentucky accident. The AP reports that Massey Energy will offer $3 million to the families of each of the 29 miners who died earlier this month.

THE ALTERNATIVE TO HEALTH CARE REFORM? Bartering with chickens. Why didn't I think of that?

SPEAKING OF WHICH, here's something on the reform we got. And even Arnold likes it. 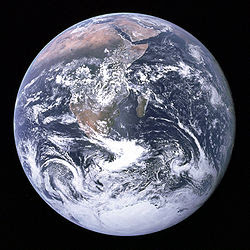 El Cabrero often teaches an off-campus evening sociology class for Marshall University. I don't get a whole lot of courses to pick from. Usually it's an introductory course. The good thing about those is that it gives you the chance to survey a whole bunch of material.

Sometimes it's Deviance and Social Control, where I tend to focus on the dark side of human nature and social life.

This time around, it's called something like Contemporary Social Problems. As you might imagine, there's no shortage of materials. I required three books, each of which I'd recommend and some of which have showed up here. The main text was Jeffrey Sachs' Common Wealth: Economics for a Crowded Planet. The others include Greg Mortenson's Three Cups of Tea and Michael Pollan's The Omnivore's Dilemma.

Sachs is an economist and director of the Earth Institute at Columbia University and is the author of The End of Poverty and several other works. The thing I like about Common Wealth is the way it methodically takes on a number of serious social problems, ranging from climate change to population to poverty, and breaks them down and suggests possible solutions.

Like a lot of people, I often find myself wondering whether the human race has blown it. The answer I keep coming back to is maybe, but not necessarily. Most of the problems we face are probably amenable to improvement if not solution. The real question is whether there will be the political will to deal with them. I'm not sure how much I'd wager on that happening.

MINE DISASTER. More institutional investors are suing Massey Energy. The mine itself is still too dangerous for investigators to enter. Meanwhile, widows of two miners who lost their lives in Massey's 2006 Aracoma mine fire are suing MSHA for being too lax in enforcing safety rules.

LANGUAGES resemble living things in more than one respect. Here's an item about saving endangered ones in an unlikely place.

THE "RACE CARD." Here are some wry observations on the state of racial politics in the US. 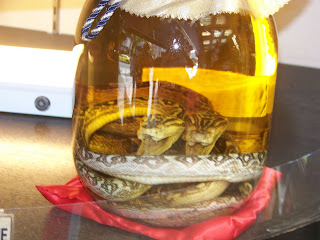 How 'bout a double?

I wrote some about my recent trip to Okinawa last week but just realized I forgot to mention a local beverage which I (almost) regret to say I didn't try. It's called awamori and is a distilled rice liquor.

The Gentle Reader has no doubt heard of mezcal, a Mexican beverage made from the plant maguey, a form of agave, which sometimes contains a worm. No disrespect to Mexico intended, but the Okinawans raised the stakes a bit. Why bother with an invertebrate when you can put a snake in instead?

The snake in question is the habu, a venomous fellow of the pit viper variety believed to have medicinal properties. Not all bottles of awamori are sold with snakes but the ones that have it are easy to find over there.

While El Cabrero will drink just about anything (within reason), somehow I didn't manage to try it this trip. Maybe next time.

(Note: it took all my self-discipline to avoid using a cheap caption with the above photo. Something like, "Is that a snake in your liquor bottle or is it just happy to be here?" I'm proud to say I resisted that temptation. I would never stoop to such a level. No way.)

UPPER BIG BRANCH MINE DISASTER UPDATES. The Mine Safety and Health Administration faced tough questions in a congressional hearing yesterday. According to Ken Ward's reporting in the Charleston Gazette,

One former Massey miner, Jeffrey Harris, testified that when he worked for the company mine management routinely ignored methane accumulations and fired miners who complained about safety problems.


"If an operator wants to, it's pretty easy to cut corners on safety," Harris said. "That's exactly what I saw at the Massey mines where I worked.


"Those people who died," Harris added, "they didn't have to die."

Here's more from the Associated Press.

SPEAKING OF DYING, here's information about the latest Death on the Job report from the AFLCIO.

PASS THE AWAMORI. Given the possible health effects of soft drinks, that snake juice is starting to look better. 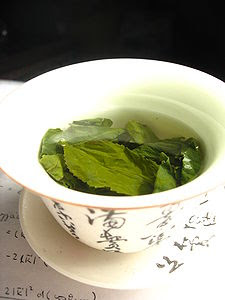 I overheard an interesting conversation regarding tea partiers recently. A friend who returned from a trip to Washington that coincided with a tea party event noted that many of them were staying in an upscale hotel and seemed to be eligible for socialistic public benefits like Medicare and Social Security.

On more than one occasion, I have heard of tea partiers whose family members received Social Security and/or SSI disability payments.

I suppose consistency is a bit too much to ask for these days. But another friend said that she'd take them a bit more seriously if they renounced their checks and public health care benefits.

Meanwhile, this blog post asks how the media and the public would react if the tea partiers were black and acted the same way.

MORE ON THE MINE DISASTER. This item appeared in last Friday's Washington Post. Meanwhile, Massey Energy struck back yesterday in its defense.

I WASN'T BORED-I WAS COOLING MY BRAIN. Apparently, that's what yawning does.

GET DIRTY. From Alternet, here are tips on the 10 easiest vegetables to grow. So far at Goat Rope Farm, we've got lettuce, spinach (not quite ready), arugula, and radishes. Peas are in and garlic has been on the way since winter time.

ARE WE WIRED FOR RELIGION? Maybe. 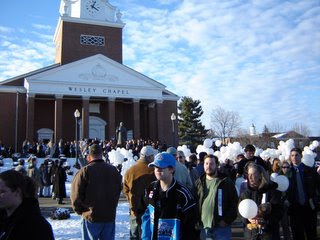 "How can a nation that relies on its miners not do everything in its power to protect them? How can we let anyone in this country put their lives at risk by simply showing up to work; by simply pursuing the American dream?"--President Barack Obama, Beckley, West Virginia, April 25, 2010

A little over four years ago, I traveled to Buckhannon, West Virginia to attend a memorial service for the miners who lost their lives in the Sago mine disaster. I remember wishing at the time that I'd never have the occasion to attend another.

Many of us were hopeful that that disaster and the Massey Aracoma mine fire that killed two miners in Logan County shortly thereafter would lead to mine safety reforms and a climate of strict enforcement that would make such things a painful memory of another era.

To be fair, some good reforms came from the responses to those deaths. But as many have noted, these were aimed at helping people survive mining accidents rather than preventing them altogether. Some recommendations made at the time were never acted upon. And some employers don't seem to pay a lot of attention to the laws and rules on the books while the agencies responsible for safety seem to lack the power to order the immediate shutdown of unsafe mines.

So it was I made my way along with thousands of others to attend another memorial for the 29 miners who died in Massey's Upper Big Branch mine. The service was dignified and orderly. It featured music, prayers, scripture readings and brief speeches by President Obama, Vice President Biden, Senator Rockefeller, Congressman Rahall, Governor Manchin and others.

There seemed to be an agreement among all who spoke that this day was to honor those who died and their loved ones. Politics seemed to be set aside, to the extent possible anyway, for this time. Anger and outrage, too, while present just beneath the surface, were kept in check for another time.

But this disaster demands a thorough investigation, one that leaves no stone unturned. It demands swift, harsh and unerring justice for any negligence or safety shortcuts discovered. It may well demand additional mine safety legislation and certainly demands much stricter enforcement of safety regulations.

I won't pretend to speak for those who came Sunday or for those who were there in spirit. But I do think it's safe to say that we don't want to have to do anything like this ever again.
by El Cabrero No comments: