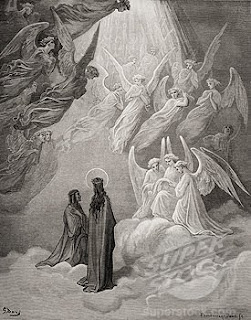 I just finished making my way through Dante's Divine Comedy for the umpteenth time. Every time I read it I come across something I'd missed before. This time I was struck and mildly amused by the discussions between the Pilgrim and his beloved Beatrice in Paradise.

When she's not chewing the poet out, she sometimes sounds like the host of Mr. Wizard's 14th Century Science World as she discusses the fine points of late medieval cosmology. At other times she enters upon long theological digressions and the occasional rant.

I particularly enjoyed her detailed discussion of angelology in Canto 29. According to her, and she was in a position to know in the context of the poem, angels possess will and intellect but--contrary to popular opinion on earth--they have no memory and no need of it because they are always gazing at the mind of God:

From the first moment these beings found their bliss
within God's face in which all is revealed,
they never turned their eyes away from It;

hence, no new object interrupts their sight
and hence, they have no need of memory
since they do not possess divided thought.

So there you have it. She didn't discuss the whole how many on the head of a pin thing however.

AT THE OTHER END OF THE GREAT CHAIN OF BEING, Massey officials may face more criminal charges in the wake of the Upper Big Branch mine disaster which killed 29 miners in April 2010.

OCCUPATIONS. The future of the Occupy Wall Street movement is considered here.

SUPERSTITIOUS? It may help. 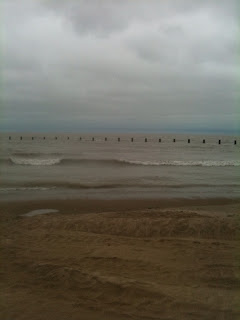 One of my favorite WV authors is Breece Pancake (1952-1979) who wrote short stories about my hometown under the fictional name of Rock Camp.
In the only remotely humorous story in his posthumous collection, "The Salvation of Me," a character dreams of escaping our corner of Appalachia and striking out for the big town of Chicago. He keeps saving up money to make the getaway but winds up blowing it on shooting pool.

Going to Chicago became an inside joke with some friends who knew and loved Pancake's work. It meant blowing this popsicle stand and hitting the big time.

I thought of Breece this week when I actually made it to Chicago for a few days of meetings. Generally, when I go on these things, the only part of the city I see is the inside of a meeting room.

This time I was a bit luckier and got to run a few miles along the lake, which helped me realized that "windy city" isn't just a clever nickname. It would be really easy one way and like jogging the wrong way through a wind tunnel on the way back.

It occurred to me that WV could use a great lake or some such massive body of water. Who knows, maybe with climate change it'll get one.

MORE ON THAT ONE PERCENT THING here and here.

TAXING MILLIONAIRES is something most millionaires support.

A WAR IS WINDING DOWN. How come people who opposed it aren't claiming success?

The United Mine Workers of America released its report today on Massey Energy's Upper Big Branch mine disaster of April 5, 2010 which killed 29 miners. Previously, reports on the disaster have been released by the WV Governor's Independent Investigation Panel and the federal Mine Safety and Health Administration.

The title of the report sums up the union's position: "Industrial Homicide." According to the union:

Massey Energy must be held accountable for the death of each of the 29 miners. Theirs is not a guilt of omission, but rather, based on the facts publicly available, the union believes that Massey Energy and its management were on notice of and recklessly tolerated mining conditions that were so egregious that the resulting disaster constituted a massive slaughter in the nature of an industrial homicide.

The union calls on federal prosecutors to pursue this case all the way up the corporate ladder, which leads to former CEO Don Blankenship.

THE WHOLE 1 PERCENT THING. Uhhh, there might be something to it.

NOTE: Still on the road. Regular posts will resume in a day or so.

Rendezvous with destiny...and a skunk 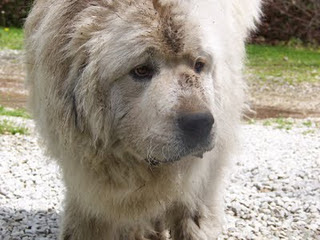 We knew that it was written into the very fabric of the universe. We knew the day would come. We knew it was only a matter of time before Arpad, our Great Pyrenees and the official security chief of Goat Rope Farm, would have a run-in with a skunk.

He stays pretty busy at night keeping an eye out for unwelcome visitors. Possums and raccoons have fallen to his wrath. Coyotes keep their distance. But last night he picked a quarrel with a member of the striped tail tribe and he had the odor to prove it.

Of course, under ordinary circumstances I would have rushed to de-skunkify him but this morning I left the house before 4 am to catch a flight.

NOTE: the link truck is broke down again. Well may the world go. 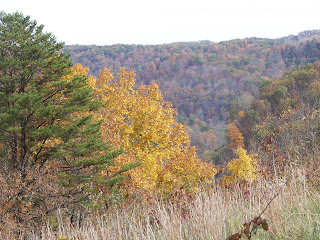 ...about autumn views in West Virginia. My seasonal good deed for the day was rescuing a torporous snake on the road today after the sun began to go down. I can't be sure but I think it was a copperhead.

El Cabrero is about to hit the road for a bit so posts may be irregular. Here are a few items that occupied my attention:

10 WAYS TO SUPPORT IT here.

POLITICS ON THE BRAIN discussed here.