Two for the road

This explains a lot: a Princeton study suggests that the USA is no longer a democracy but rather an oligarchy, as in rule by the wealthy few. To some that might be a radical assertion; to others, it is stating the obvious. I tend to fall into the latter camp.

And then here are the post-election reflections of my friend Ken Ward at Coal Tattoo.

Cheers!
by El Cabrero No comments: 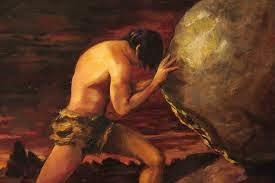 "The struggle itself towards the heights is enough to fill a man's heart. One must imagine Sisyphus happy."-Albert Camus, The Myth of Sisyphus
by El Cabrero 1 comment:

Email ThisBlogThis!Share to TwitterShare to FacebookShare to Pinterest
Labels: Albert Camus, The Myth of Sisyphus

My friend Ken Ward over at Coal Tattoo has some words of wisdom on this election day. He notes that while lots of politicians rattle on about the so-called "war on coal,"

The list of things that coalfield candidates don’t want to talk seriously about is long and important: Mine disasters, black lung disease, global climate change, the environmental and human health costs of mountaintop removal, and — probably most significantly — what Southern West Virginia and Eastern Kentucky will do for jobs and an economy as the region’s coal production continues to decline.

In particular, candidates from both parties have tended to vie with one another on who can bash Obama the most. Ward blames the media as much as the campaigns for going along with oversimplified soundbites.

He nails it with his conclusion:

Because elections do matter. And regardless of who controls the U.S. Senate or the W.Va. House, coalfield residents will wake up on Wednesday facing the same set of serious challenges: Natural gas will still be cheap. The best coal reserves in Central Appalachia will still be mined out. Carbon dioxide in our planet’s atmosphere will still be climbing to levels we should all be afraid of. The coal-mining jobs that are left will will be too dangerous, putting workers at risk of dying suddenly in a roof fall or slowly from black lung.

When all the votes are counted, our region will still face too much drug abuse and too little education, too much pollution and not nearly enough quality health care, too many WARN notices and too few jobs — too much fear and far, far too little hope. And mostly all the election will have done with its endless television ads, sound bites and attacks is the one thing that coalfield residents can least afford: Torn us further apart, instead of bringing us closer together.

The whole piece is worth a look and has tons of links.
by El Cabrero 1 comment:

Two on health care...and the legacy of racism

One of the reasons it took the US nearly 100 years to have something like a nationwide health insurance program is pretty stark and ugly: racism. The idea was initially raised in Theodore Roosevelt's 1912 run for the presidency on the Bull Moose or Progressive Republican ticket. His distant cousin Franklin talked about it but couldn't quite get there.

Neither could his successor Harry Truman, thanks largely to the opposition of southern senators who feared that health care reform would benefit African Americans and undermine the segregated hospital system.

It took the election of Barack Obama in 2008, a House Democratic majority, and a (brief) Democratic supermajority in the Senate to make the Affordable Care Act possible, as limited as it is.

While the ACA survived a challenge in the US Supreme Court, the majority of justices dealt it a major blow by making Medicaid expansion a state option rather than a mandate. And, surprise, many of the states that have so far not chosen to expand Medicaid under the ACA are former Confederate slave states.

Ironically, many if not most of southerners who would benefit from the expansion are white. That's just another example of how racism hurts everyone, not just the obvious targets.

You can read more about the politics of ACA in Mississippi here and look at how many Americans are or could have been covered by Medicaid expansion here.

Once again, I'm grateful that WV's Gov. Earl Ray Tomblin did the right thing in 2013. Since his decision to expand Medicaid, around 155,000 working West Virginians have gained coverage.

Oh, yeah, and I'm glad WV left the southern Confederacy 151 years ago. Otherwise, and among other things, that expansion of health care might never have happened.
by El Cabrero No comments: