A friend today emailed me a great quote from a new book titled Raising Expectations (and Raising Hell): My Decade Fighting for the Labor Movement by Jane McAlevey with Bob Ostertag. Here goes:

"...organizing, at its core, is about raising expectations: about what people should expect from their jobs; the quality of life they should aspire to; how they ought to be treated when they are old; and what they should be able to offer their children...Expectations about what they themselves are capable of, about the power they could exercise if they worked together, and what they might use that collective power to accomplish."

There's more about the book here.

The latest development in the criminal investigation of Massey Energy's Upper Big Branch mine disaster is the sentencing of a former mine superintendent. Here's hoping there's more to come.

TOTALLY OFF TOPIC. El Cabrero has always considered it unsportsmanlike to boil such creatures as lobsters and crabs alive. While I remain in the omnivore camp, and have been known to dispatch a creature or two to what I devoutly hope will be a pleasant rebirth in the Pure Land of Amida Buddha, I consider it but common decency to refrain from either cooking or eating a live creature.
I have been told by several people that these animals don't feel pain, to which I always want to reply, "How the hell do you know?" Anyhow, according to this NPR story, it would appear that they do feel pain after all. So there.

FROM THE SAME PLACE, but on a more pleasant topic than that of boiling sentinient beings alive, here's a look at how music can bliss out your brain.

Lately I've been reading a good bit by and about Ralph Waldo Emerson. This little passage from his journals reminds me a bit of the mess going on now in the US House of Representatives:

'Tis a matter of certainty that the base side will win. My rule of political prophecy, is, to ascertain which is the worst party, & the meanest action, that is the thing which will be done and I am seldom disappointed...

That rule doesn't always hold, but it seems to be pretty robust in some circles anyway.

ABOUT THAT GIANT SQUID I mentioned the other day. There's some brief footage here. This thing has a pretty eye.

LOSING THEIR RELIGION. More Americans, especially young ones, are. 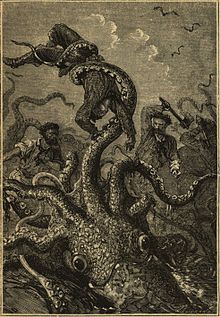 Several years ago, I posted a copy of this 1830 poem by Tennyson called The Kraken:

Below the thunders of the upper deep;
Far, far beneath in the abysmal sea,
His antient, dreamless, uninvaded sleep
The Kraken sleepeth: faintest sunlights flee
About his shadowy sides: above him swell
Huge sponges of millennial growth and height;
And far away into the sickly light,
From many a wondrous grot and secret cell
Unnumber'd and enormous polypi
Winnow with giant arms the slumbering green.
There hath he lain for ages and will lie
Battening upon huge seaworms in his sleep,
Until the latter fire shall heat the deep;
Then once by man and angels to be seen,
In roaring he shall rise and on the surface die.

For a look at a real kraken, click here. This is by far the best looking giant squid I've ever seen. Real footage will be available soon.

MORE FEDERAL BUDGET DRAMA TO COME. But dealing with it by cuts alone is a really bad idea.

It looks like former Massey Energy CEO Don Blankenship is all about coal mine safety these days. I don't even know where to start with that.

In other news regarding ironic, hypocritical, inept or just not very smart speech, it looks like the rape boys of the conservative school of gynecology just can't leave the topic alone. I kinda hope they keep jabbering away.

Some people might do better talking to imaginary friends away from the media limelight.