Some days are better than others

West Virginia senator Joe Manchin has been in the news a bit lately, the most recent example (to my knowledge) being speculation that Trump may tap him for energy secretary. This may or may not explain his stated support for the appointment of Jeff Sessions, whose record on racial issues is...let's just say out there.

As if all that wasn't enough, he has also been widely quoted as saying he'd "beat the hell out of" anyone he found burning a flag. I wonder if he feels the same way about hate groups that hide behind the flag?
by El Cabrero 2 comments:

In yesterday's post, I meant to link this article about the tragic killing of James Means, an African-American teenager who was called "another piece of trash" by the white man who killed him. Here's the corrected link. Sorry about that.

Finally, as wretched as things seem, here's a little less heavy news story about a Swedish holiday custom that involves a giant straw goat. Whatever else can be said about them, straw goats are probably easier to deal with than the real thing.
by El Cabrero No comments:

A little existentialism and more 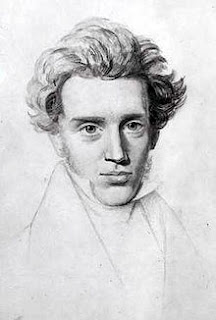 "It is perfectly true, as philosophers say, that life must be understood backwards. But they forget the other proposition, that it must be lived forwards. And if one thinks over that proposition it becomes more and more evident that life can never really be understood in time because at no particular moment can I find the necessary resting-place from which to understand it."--Soren Kierkegaard

Well, that takes some of the pressure off, doesn't it?

So, without attempting to understand anything, here are a few items:

*A take from outside WV on the horrific murder of a young African American teen by a white man in the capitol city of Charleston. More on that to come.

*The latest Front Porch podcast, about growing up Arab-American in WV.

*A bill in the US Senate that actually makes sense.
by El Cabrero 3 comments:

For the hell of it

This op-ed of mine about Dante's Divine Comedy (and us), came out in yesterday's Gazette-Mail.

No human creation is perfect, but one that comes pretty close in my book is Dante’s “Divine Comedy.” Its three books, or canticles, provide a guided tour of hell, purgatory, and paradise through the eyes of the poet and summarize the Christian theology, philosophy and world view of much of medieval Europe.

The opening line of the “Inferno” is one many can relate to: “In the middle of our life’s journey, I awoke to find myself in a dark wood, having lost the true path.” Dante is in fact so lost that, with the help of divine intervention, he has to literally go through hell to find salvation.

That rings true for me in more ways than one.

Along the way, he is aided by the spirit of Beatrice, someone he loved from afar in his youth, and by the ancient pagan Roman poet Virgil. Beatrice symbolizes divine grace, while Virgil represents human effort and reason. Both are needed, but human effort can only go so far. In the end it must give way to help from above. Virgil speaks less and less as the story continues and disappears completely near the top of Purgatory, while Beatrice takes the lead.

If Dante is read at all these days, most stop with the “Inferno.” Its appeal is understandable, but stopping there is a bit like walking out of a good movie half an hour into it.


His hell is like an inverted funnel that gets worse as you go deeper. He classifies sins differently than we might today. The least bad places there are are for those who lacked self-control in life. Then come the abodes of the violent. The worst part, which is ice cold, is reserved for deceivers and traitors.

Generally, punishments fit the crime by resembling or contrasting with the sin itself. For example, those given to lust in life are driven around in a violent wind, while fortune tellers walk eternally with their heads on backwards. The term for this is “contrapasso.”

Lowest of all is Satan, “the Emperor of the sorrowful kingdom,” who betrayed his creator. In a dark parody of the Trinity, he has three mouths which gnaw on Brutus and Cassius, who betrayed Julius Caesar, and Judas Iscariot, who betrayed Jesus.

After you go so far down, you often wind up going up, which is what happens to Dante and Virgil. I hope it happens to us as well.

After descending to the bottom of hell, they wind up on the opposite side of the world at the mountain of Purgatory, where the souls of those who are saved but still tainted by sin are purified.

(So much for the idea that medieval people believed the world was flat.)

Purgatory is a seven-story mountain or wedding cake where one by one each of the seven deadly sins is cleansed, again with the penance fitting the crime. Pride is purged by carrying heavy weights, which keep the penitent from looking up. Lust is purified in a fire so hot that Dante says he’d have gladly jumped into molten glass to cool off.

Those in Purgatory who are destined for salvation are not any better than those in hell. The only difference is that they repented of their sins. As Beatrice says, “When condemnation of the sin bursts forth from the sinner’s lips, here in our court the stone is turned back against the blade.”

Dante’s heaven is pretty trippy. There are different levels or spheres according to the capacity of those who are saved. It’s a bit like the mother of all light shows, where some are closer to the stage than others, but everyone can see as much of it as they can handle.

His journey involves conversations with saints and saved souls, as well as a warning from his ancestor that he must prepare for a life of exile from his beloved city of Florence (he was exiled in 1302 when political winds shifted and never returned).

At last, he is granted a vision of God words cannot describe. He ends the poem by saying that “like a wheel in perfect balance turning, I felt my will and my desire impelled by the Love that moves the sun and the other stars.”

It’s an amazing work, one that can also be read as a poem of exile and even of politics. It’s hard to doubt that he enjoyed handing out real estate in hell to his opponents, including some corrupt popes. Many commentators have also noticed that hell seems to have more than its share of Florentines.

I’ve often thought that it would be interesting if he could be brought back to bring the “Divine Comedy” up — or down — to date. A U.S. or even West Virginia specific version of “Inferno” would be really cool — or maybe ice cold. I might even have a suggestion or two. For example, the evil genius who first came up with the idea of separating surface rights from mineral rights, which has caused so much suffering here, surely deserves s special spot.

I imagine that one circle of hell that might be getting a lot of business soon (unless people repent, of course) is that of false counselors, those who used their words, power and influence to promote unjust causes. Such people who inflamed others with their speech are themselves encased in flame in the eighth circle of hell.

There are plenty of voices of hatred today inflaming our worst fears and passions. My wish is that, when we hear them in the land of the living, we follow the advice of Virgil where he says of other lost souls, “Mercy and justice deny them even a name. Do not speak of them. Look and pass on.”