Say what you like about WV's political leaders like WV's Gov. Earl Ray Tomblin--and I often have--I give him huge credit for choosing to expand Medicaid to low wage working people last year. And I also have to give credit to the WV Department of Health and Human Resources for doing a fantastic job of signing people up for it.

Earlier this week, I heard that already around 121,000 state residents had signed up for expanded Medicaid coverage under the Affordable Care Act. That is 92 percent of the eligible population and we got there years ahead of educated estimates.

If you add in the 20,000 or so who got covered through the exchange and the 15,000 who found out they were eligible for existing programs, that adds up to 156,000 people in the state who got covered this year.

Using a baseline figure of 240,000 uninsured in the state prior to the ACA, that means a drop of about 65 percent in the population of uninsured West Virginians. That really is quite a feat.

Contrast that with the brutal indifference of state leaders who have refused to expand the program and you'll see quite a difference.
by El Cabrero No comments:

What a difference a day makes

Yesterday's post was kind of a downer about how it seemed impossible to restore funding for programs for kids and families that were cut in the WV state budget by Gov. Tomblin.

It turns out that state legislators had a trick or two up their sleeves at the special session. In a surprise move (probably as much to the governor as to advocates), the WV House unanimously restored funding to domestic violence programs, child advocacy centers, family resource centers and networks and other programs. The Senate overwhelmingly concurred. And, at this point, it looks like the governor is OK with the result.

Read more on that here.

As early as this morning, I would have given this zero probability of occurring, at least within several months. And Republicans were as insistent on restoring the funding as Democrats. In some cases, more so.

It just goes to show you never know. Thanks and congratulations to all the kids, families and advocates who pushed for this. Having a few hundred folks hit the capitol yesterday certainly didn't hurt either.
by El Cabrero No comments:

Regular sessions of the WV legislature generally last 60 days, which meant this year's ended in early March. Except it kind of didn't. No sooner did it end than a major corporate law firm bypassed democracy and launched a major effort to get the governor to veto a minimum wage increase. The struggle to fight off the veto threat lasted several days, but even then it wasn't over.

Governor Tomblin and legislative leaders agreed to call a special session this month in part to deal with technical problems with the bill but preserve its main purpose. I'm hoping that gets resolved once and for all tomorrow without any surprises or drama. More on that here.

There's other leftover baggage from the session as well. In his proposed budget, the governor cut around $980,000 from early childhood and domestic violence programs. The House and Senate eventually restored the cuts, but the governor used his line item veto power after the session to cut the programs again.

While some of funding has been restored, around $800,000 remains, which means some battered women won't get needed services and some may die. And vulnerable kids and families will miss out on needed services. And around 80 dedicated people in various useful social services will lose their jobs.

More than 200 people from all over WV, including yours truly, hit the capitol today to oppose the cuts, but that situation won't be fixed in the short term. More on that here and here. The struggle to restore funding is likely to continue into the summer, with more struggles likely to come.

I'm once again reminded of those Dylan lines where he ponders what price we have to pay to get out of doing everything twice. Actually, at this point, just having to do it twice looks pretty good. 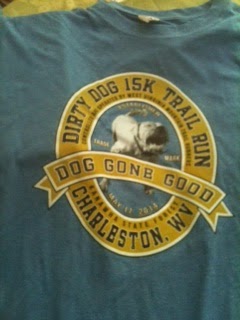 El Cabrero is not one to shy away from deep philosophical issues or ethical dilemmas. Especially if they involve profound questions, such as under what conditions is a person allowed to wear a tee shirt from an endurance event, a topic I've blogged about more than once.

To start with, there is the basic proposition that it is an act of arrogance and hubris to wear a tee shirt for an event before one actually completes it. It's like the same point from Herodotus' Histories where he tells the story of Solon's maxim of calling no one happy until you have seen their last hours.

Then there is the proposition that one does not deserve to wear the tee shirt of a race one began but didn't finish. Once, shortly after having heart surgery, I signed up for a triathlon. The water in Summit Lake was ice cold (to me anyway) and I couldn't breathe and didn't finish. I never wore the shirt.

Circumstances have recently forced me to grapple with another tee shirt dilemma. I was planning on running a 15K trail run this weekend but was stranded by the miseries of air travel. In this case, the Spousal Unit picked up my package thinking I'd be there in time.

I'm thinking that since I probably would have finished it if Delta had gotten me home on the right day, even if it meant crawling across the finish line on bloody stumps, I have the ethical right to wear the shirt, as long as I complete a 15K at some point.