Time for an eel poem

And who better to provide one than Ogden Nash? Here's one that should rank right up there with Dante, almost. Appropriately enough, it's titled The Eel:

I don't mind eels
Except as meals.
And the way they feels.

How come I can never come up with anything that cool? I guess the Muses just have some favorites.
by El Cabrero No comments: 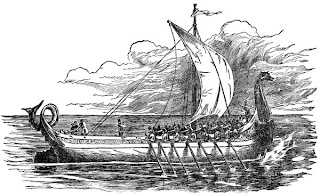 I've been making my leisurely way through Beowulf here lately, although there are links and comments about current events below. It really is a good poem. If you feel inclined, please click on earlier posts.

At this point in the poem, Beowulf hears of how the monster Grendel is terrorizing the Spear Danes and sets off on a ship with 14 heavily armed buddies. The first obstacle he has to pass is a Danish coast-guard whose job it is to watch the seas for enemy raids.

This is one of the mildly comic passages in the poem. The guard seems to be a lonely guy so eager to talk that he hardly gives the visitors a chance to answer his questions. And he seems prone to a man crush, not that there's anything wrong with that. First he's all business:

...Who are you armored men,
protected by mail, who thus come sailing
your high ship on the sliding wave-roads,
overseas to this shore? Long have I held
the sea-watch in season, as the king's coast guard,
that none of his enemies might come to Denmark,
do us harm with an army, their fleet of ships.

Then he can't help gushing about the visitors and especially their leader:

Never more openly have warriors landed
when carrying shields, and you have no leave
from our men of battle, agreement with kinsmen.
Never have I seen a mightier noble,
a larger man, than that one among you,
a warrior in armor. There's no mere retainer
so honored in weapons-- may that noble bearing
never belie him!

And finally, he gets back to business again:

I must know your lineage,
now, right away, before you go further,
spies scouting out the land of the Danes.
Now, you far strangers from across the sea,
ocean-travelers, hear my simple thought:
haste is needed, and the sooner the better,
it is best to be quick and say whence you come.

All this without giving Beowulf or anyone else a chance to reply.

BUDGET MADNESS. Here's an op-ed by a co-worker of mine in New Hampshire about the federal budget mess.

SPEAKING OF WHICH, here's the Washington Post on fun and games in the US House.

SOUND AND FURY. Here's Krugman's latest whack at the subject.

MARCELLUS SHALE. At a public hearing in the WV legislature yesterday, several speakers called for greater regulation of the natural gas boom.

DRINK UP. At least some Ice Age Britons used skulls as drinking cups. Presumably you'd get out the best ones when company was coming.

Guess who's coming to dinner 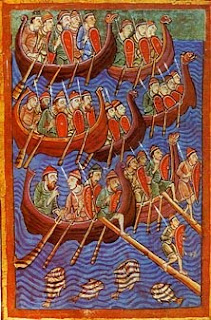 I've been blogging off and on lately about Beowulf, along with current events. It really is a cool story with both ancient and universal themes.

One big theme in the ancient and medieval world was the problem of hospitality or how to deal with guests, hosts and strangers. It may well be that humans are hard wired to have an in-group/out-group orientation, which makes dealing with strangers, singularly or in groups, an ambiguous matter. New people might prove to be good friends or dangerous enemies and both host and guest posed potential threats to each other.

Issues of guests, hosts and hospitality were major themes in the Iliad and Odyssey and other Greek myths as well as in the Bible and other sources. It's no surprise that this is also an issue in the Anglo-Saxon poem Beowulf, which portrays societies that spend at least part of the time raiding each other.

What would you do if 15 heavily armed proto-Vikings showed up on your doorstep? Or, if you were one of the 15, how would you convince those who met you that you meant no harm? And, by the way, how much mead is there in the cellar, anyway?

Before any major monster-killing can be done, these kinds of details have to be sorted out. More on that to come.

WHAT'S NOT ON THE TABLE. Here's an op-ed by a co-worker of mine about what is missing from deficit reduction discussions.

STICKER SHOCK. A new Harvard study of the costs of coal finds a bigger bottom line.

AN ODD COINCIDENCE. It just so happened that just before the basically nonviolent Egyptian revolution burst upon the scene I started rereading a volume of Gene Sharp on non-violent action. I couldn't help thinking of him as events unfolded. Here's a profile of Sharp from today's New York Times.

OLD DOGS. Here's a look at the canine family tree from wolf to woof.

El Cabrero has been running around too much to put together a decent post today. However the following items caught my bleary eye this morning:

REMEMBERING REAGAN. If we must, let's get it right.

PUBLIC EMPLOYEES, and especially those represented by unions, are major targets on the right.

STATE OF THE STATES. For most, not good.

On the (swan's) road 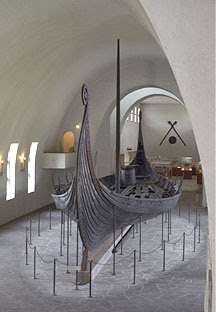 The theme here lately, with some interruptions, has been the old Anglo-Saxon poem Beowulf. This may or may not be due to the fact that the WV legislature is in session and I've been kind of busy lately. You will find links and comments about current events below.

To recap, Hrothgar, king of the Spear Danes, had a pretty good string of luck and celebrated by building Heorot, the greatest of all mead halls, which were places where between raids lords and thanes and various other people would hang out, feast, and drink themselves to oblivion.

Things were going peachy until the monster Grendel started eating people who stayed there and generally preying on the population. As the poem goes,

There was panic after dark, people endured
raids in the night, riven by terror.

This was not only a major inconvenience for Hrothgar, but kind of a humiliation too. Here this mighty king who conquered others couldn't even keep his home turf safe. The situation lasted for some years, until at last the story came to the ears of Beowulf, a thane of the Geats who lived in southern Sweden, about whom this was said:

There was no one else like him alive.
In his day, he was the mightiest man on earth,
high born and powerful.

Beowulf's name means "bee wolf" or bear. He is the son of Ecgtheow and nephew of Hygelac, the king of the Geats. As a young man, Ecgtheow received shelter from Hrothgar and Beowulf intends to return a favor as well as win glory. He received no discouragement from the Geats, who checked the omens and found them favorable. He recruited a posse of fourteen warriors and set off by ship on "the swan's road" in search of glory.

He obviously found it, or there wouldn't be a poem, huh? More tomorrow.

THE PRESIDENT'S BUDGET. Here's Robert Greenstein of the Center on Budget and Policy Priorities on President Obama's budget proposal.

HOW ON EARTH DID WEST VIRGINIA NOT MAKE THIS LIST of states with the worst eating habits?

IF YOU EVER WONDERED HOW TO FIGHT OFF A CROCODILE, click here.

A matter of perspective 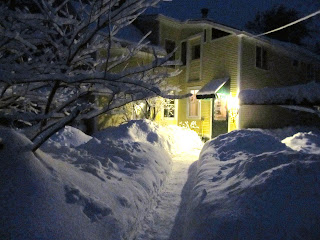 The weather is supposed to be a good bit milder this week, but all in all it seems to me that this winter has taken itself entirely too seriously. As much as I've complained about the weather the last few months, however, these pictures send last week from the in-laws in Vermont put things into perspective. Maybe things haven't been so bad here after all. 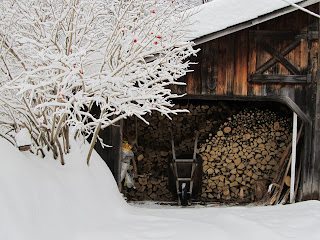 GET READY TO RUMBLE. President Obama's proposed budget is going to call for deep cuts in many programs, including heating assistance for low income Americans. Congressional Republicans are going to push for even more draconian measures.

HOME HEAT. Kudos to WV Senator Jay Rockefeller for opposing cuts in programs that get many low income people through the winter.

MANDATE? Here's an interesting Pew survey on what Americans really think about cutting the federal budget.

JUST DO IT. Here's an item from the WV News Service about modernizing West Virginia's unemployment insurance system. A bill now under consideration in the state senate (SB 310) would draw down $22 million in federal money if the state extends eligibility to people who need it but can't get it.