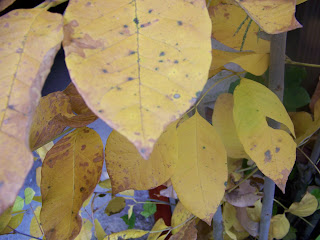 Despite the dry summer and fall (so far) it's a great year for fall colors. And it was a great misty morning for a seven mile trail run through some beautiful terrain. There is something about running on trails that is very different from pounding on roads. For one thing, it imposes a kind of mindfulness meditation on every step you take. For another, you forget about times and miles and enjoy the view. And it really works your core in a different way from road or track running. Next week, I'm hoping to retrace this morning's run in a night time race. Since I  managed to twist my ankle pretty badly in broad daylight on a flat part of the course, I can hardly wait to see what the damage will be next week.

NOTE: Goat Rope readers will get a brief respite from Moby-Dick.
by El Cabrero No comments:

Paying and being paid

Goat Rope these days is all about why everyone needs to read Moby-Dick for the first or umpteenth time. And I'm still on Chapter 1.

Whilst I was pondering this whale of a book this morning, it occurred to me that if one removed all the digressions and stuck to the action, our tome would shed a good several hundred pages. But a good digression is worth a discourse and a half most days and any number of plots. Besides, nobody can digress like our beloved narrator Ishmael.

I particularly appreciate the astuteness of his observation on the vast difference between receiving and doling out money:

...there is all the difference in the world between paying and being paid. The act of paying is perhaps the most uncomfortable infliction that the two orchard thieves entailed upon us. But BEING PAID,--what will compare with it? The urbane activity with which a man receives money is really marvellous, considering that we so earnestly believe money to be the root of all earthly ills, and that on no account can a monied man enter heaven. Ah! how cheerfully we consign ourselves to perdition!

REDS AND BLUES. Here's Steven Pinker on America's political geography and why it is the way it is. (Note: I think he left out one factor, to wit, that states formerly based on slavery are more likely to sanction violence generally, where person or through things like the death penalty).

CONSERVATIVE GYNECOLOGY. I'm a little confused by recent comments from right wing male politicians regarding uteri. Specifically, how does the  recent comment about God's will fit in with the earlier one about "legitimate rape"?

APPALACHIAN COAL. Politicians around here like to blame the EPA and a certain president, but here's a look at the real engine behind coal's decline.

EVERYTHING YOU ALWAYS WANTED TO KNOW ABOUT ZOMBIE MAKEUP here.

"For my part, I abominate all honorable respectable toils, trials and tribulations of every kind whatsoever."--Ishmael in Moby-Dick.

Here's yet another reason why everyone should read this greatest American novel: most of us are grunts one way or another and the book basically sings the greatness of gruntdom. And even if you have a good gig, you gotta serve somebody, as Dylan sang. Ishmael takes great pride in taking to sea as a simple sailor, even though it means getting ordered about and yelled at.

In his view, the human condition is such that we are all in one way or another a grunt at the disposal of some arbitrary power, even if it is simply that of an indifferent universe:


What of it, if some old hunks of a sea-captain orders me to get a broom and sweep down the decks? What does that indignity amount to weighed, I mean, in the scales of the New Testament? Do you think the archangel Gabriel thinks anything the less of me, because I promptly and respectfully obey that old hunks in that particular instance? Who ain't a slave? Tell me that. Well, then, however the old sea-captains may order me about-however they may thump and punch me about, I have the satisfaction of knowing that it is all right; that everybody else is one way or other served in much the same way-either in a physical or metaphysical point of view, that is; and so the universal thump is passed round, and all hands should rub each other's shoulder blades, and be content.

I don't think I have Ishmael's confidence that things equal out over time, but I appreciate the generosity of his sentiment.

WHAT HE SAID. WV's senior senator goes off on the Ryan budget here.

GRANDMOTHERS made us what we are today. Maybe even literally.

THE DONALD HATCHES A DUD. Not much of a Trump card. (Full disclosure: the Spousal Unit and I used to dream of a 2012 Trump/Palin ticket purely for the entertainment value. You betcha.)

I felt so symbolic 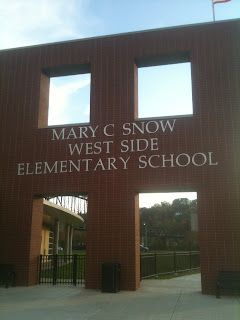 We interrupt Goat Rope's regularly scheduled Moby-Dick series to celebrate a nice little victory. As noted earlier in this blog, members of Charleston WV's African American community and many white allies mobilized over the last year to add the name of Mary C. Snow, a prominent black educator, to the new West Side Elementary School.

This post from February shows what it's like when hundreds of people turn out for a school board meeting to make a stand. And this post from July celebrates the fact that community members overcame resistance and converted former opponents to support the name change.

On Tuesday night, I was back in the neighborhood and was thrilled to see that it had actually happened. A friend had previously circulated a picture, but I thought it might have been photo-shopped. Like doubting Thomas of old, I had to experience the reality for myself. And it was sweet.

Yes, it was primarily a symbolic victory. Yes, we have much bigger problems to deal with. As a general rule I prefer hard targets (as in policy wins) to symbolic victories, but it occurs to me that humans are, after all, creatures of sign and symbol. And that symbolic victories are sweet as well.

(I am reminded of the lyrics of my favorite song from the 1990s, Mr. Jones by Counting Crows: "I felt so symbolic yesterday.")

POLLS, JESUS, POLITICS AND ALL THAT are discussed in the latest edition of the Rev. Jim Lewis' Notes from Under the Fig Tree.

THE RAW AND THE COOKED. Was cooking the trick that helped early humans develop such big brains? Maybe.

IN CASE YOU WERE WONDERING what was up with former Massey CEO Don Blankenship after Frodo melted the Ring he retired from the company, click here. 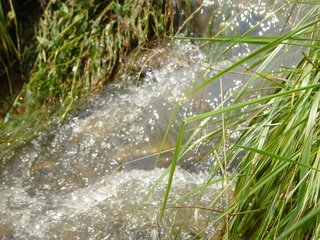 The theme at Goat Rope these days, with some interruptions, is Moby-Dick and why everyone who hasn't should drop everything and read it. Or listen to a good recording of it. Or do either one again if one already has.

Here's another reason to do it: Melville says things in there that many of us have already thought or felt, only he says it  better. Or maybe he articulates something that was always in us, if somewhat vague and unformed.

Here's an example (and we're still in Chapter 1). Ever since I was a kid, I was drawn to water. Creeks, rivers, ponds, lakes, and the occasional ocean. Even a good mud puddle will do in a pinch. The absence of water, as in a drought, feels to me like the hatred of God. There's something soothing and calming about it.  Sometimes I just want to gaze at it and do nothing.

Say you are in the country; in some high land of lakes. Take almost any path you please, and ten to one it carries you down in a dale, and leaves you there by a pool in the stream. There is magic in it. Let the most absent-minded of men be plunged in his deepest reveries- stand that man on his legs, set his feet a-going, and he will infallibly lead you to water, if water there be in all that region. Should you ever be athirst in the great American desert, try this experiment, if your caravan happen to be supplied with a metaphysical professor. Yes, as every one knows, meditation and water are wedded for ever.

COALFIELD BLUES. Here's a great AP story on hard times in the coalfields.

TALKING SENSE AGAIN on the economy is Paul Krugman.

SPEAKING OF WHITE WHALES, this one can imitate human speech.

To clear the palate

Goat Rope's ongoing series on Moby-Dick will resume tomorrow, as will relevant links on social justice issues. But for now, how about a little viral Korean hip-hop.