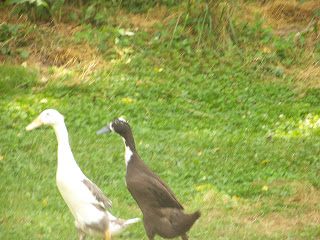 We are pleased to introduce Goat Rope readers to the latest additions to the menagerie, i.e. two runner ducks from my sister-in-law's farm in Vermont. These two enjoy paddling around in a kiddie pool but are painfully shy and hard to photograph, with "runner" being the key word here. 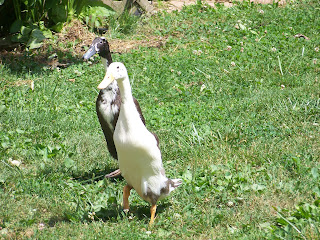 Their main function is to run around and be cute, a task they seem to have mastered. No names have been issued or discovered as of yet.
by El Cabrero No comments: 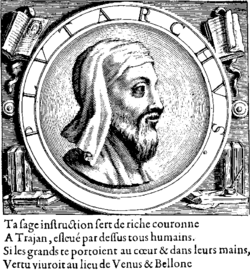 Despite the fact that history is a pretty bloody affair, there have been plenty of examples of successful nonviolent action from ancient times on.

As I mentioned earlier, I'm taking another swim through Plutarch's Lives, which recounts popular biographies (rich in legend) of prominent ancient Greeks and Romans. Currently, I'm on the life of the Roman general and aristocrat Coriolanus, which became the basis of Shakespeare's play of the same name and a recent movie version I haven't got around to watching yet.

According to Plutarch, in the early days of the Roman Republic, somewhere around the 5th century BC, the lower classes were severely exploited by the elite, with debt being a major issue (good thing that never happens any more, huh?). The poor responded by engaging in what may well be history's first sit down strike...or, if you prefer, occupation:


...the poor commonalty, therefore, perceiving there was likely to be no redress of their grievances, on a sudden collected in a body, and, encouraging each other in their resolution, forsook the city with one accord, and seizing the hill which is now called the Holy Mount, sat down by the river Anio, without committing any sort of violence or seditious outrage, but merely exclaiming, as they went along, that they had this long time past been, in fact expelled and excluded from the city by the cruelty of the rich; that Italy would everywhere afford them the benefit of air and water and a place of burial, which was all they could expect in the city, unless it were, perhaps, the privilege of being wounded and killed in time of war for the defence of their creditors.

Since the aristocrats needed the lower classes both for work and war, serious negotiations ensued which resulted in the creation of the office of tribunes or elected officials to serve as "protectors for those in need of succor."

Not too shabby. We might need to dust that one off before its over with.

(Coriolanus himself, by the way, was a bit of a jerk to the poor, which resulted in his own undoing.)

WANT TO OWN A VINTAGE VAMPIRE SLAYING KIT? Here's your chance.

THE SCIENCE ON CAT PEOPLE AND DOG PEOPLE discussed here.

Hardly a week goes by in El Cabrero's beloved state of West Virginia without some kind of coal related drama. This week is no exception.

Yesterday, a friend emailed me this story about WV's junior senator Joe Manchin, for whom some days are better than others. Apparently Manchin is concerned that the youth of America are in danger of not getting enough exposure to mercury, thanks to those evil environmental extremists in the Obama administration. Apparently, the belief is that mercury exposure creates a lot of jobs or that curtailing it kills them.

All this is part of the EPA-is-the-devil narrative which blames all the ills of the coal industry on the black guy. The fact that the real war on coal is being waged by the natural gas industry (which seems to be winning) goes unnoticed.

Even weirder that all this is the effort of Republican senatorial candidate John Raese, who is challenging Manchin again this year, to portray Manchin as an environmental extremist and close ally of President Obama.

Raese doesn't have nearly as many good days as Manchin. Not so long ago, he compared bans on smoking to the Nazi treatment of Jews.

As we head into the 2012 general election, look for lots more war on coal posturing on one side and lots of subtle and not so subtle reminders that candidates of a certain party can be associated with a black man on the other.

Should be fun to watch.
by El Cabrero No comments:

I used to think that there were two kinds of people: those who were comfortable in courthouses and those who weren't. I fell into the latter category. This could be because I mostly go into mine to deal with things like taxes on cars and such and have to go through a metal detector to do that.

Lately, however, I've been spending a good bit of time in courthouses around the state talking to county commissions and economic development authorities about the need to create a Future Fund for West Virginia from natural resource severance taxes. I've found that some of them are really nice and welcoming. As in friendly places without metal detectors.

One kind of creepy thing that I've heard about and have seen in some courthouses, however, is a real sign of the times in the Marcellus Shale boom areas, to wit, swarms of abstractors scavenging tax and property records to find victims ...I mean landowners who may or may not own mineral rights to the places they live on. It can often the first step in ruining the lives and health of some inoffensive rural family.

It reminds me of the old stories about how unsuspecting farmers were swindled out of their land in the early days of the coal boom 100 or so years ago.

I think a lot of local people have the same reaction I do to the swarm. Here's one anecdote: while eating at a local restaurant in one north central county with a friend on the Future Fund trail, a waitress gave us a good looking over and tentatively said, "Y'all aren't abstractors are you?" I assured her that we weren't and that they gave me the creeps too. She said she was concerned about the quality of life in the area and was worried about how things would change if and when a major land grab got going there.

I can't say I disagree. I do hope that at least this time around we find away to limit the damage and get something out of it.

MY FINGERS ARE CROSSED. There have been some interesting developments in the federal investigation of Massey Energy's Upper Big Branch disaster that might signal prosecutions moving up the corporate ladder.

IT WASN'T JUST YOUR IMAGINATION. The Great Recession was really bad.

UP WITH THE CHICKENS?  You may be happier.

The lion in summer 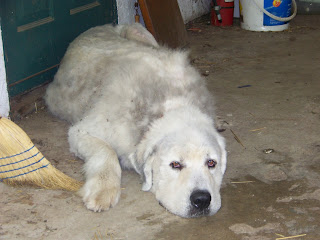 Pictures of Arpad, Great Pyrenees and security chief at Goat Rope Farm, have often graced this blog. During the winter, he looks pretty regal, reminding me of the noble lion Aslan from C.S. Lewis' Narnia books. In the summer, however, not so much.

Because his hair is so think, he gets miserable when temperatures rise. So, around late may or early June we break out the clippers and attempt to give him a bit of a shave.

Let's just say the results aren't pretty and it takes several assaults to make a real dent in the old fuzz bucket. A neighbor described the shorn version, not too unjustly, as "the biggest white rat I ever saw."

But he still looks like an angel to me.

HOW MUCH LONGER? Here's an item by a co-worker on how family members of miners who died in Massey's Upper Big Branch disaster and still urging Congress to move on mine safety.

THE POLITICS OF COAL  are the topic of this post from Ken Ward's Coal Tattoo.

GOT FIGS? Here are the latest musings on war, peace, drones, gardens and such from the Rev. Jim Lewis.

Admittedly, hot dogs in particular and food in general aren't usually a topic at Goat Rope. But I've been crisscrossing West Virginia lately trying to drum up support for creating a Future Fund from mineral severance taxes that would generate a long term stream of wealth for solving tomorrow's problems.

But even if you're trying to save the world, you gotta eat somewhere. And a campaign like this has been a great way for El Cabrero to sample the real taste of West Virginia.

On a recent trip to Marion County, that somewhere was Yann's, which is not just a hot dog stand but the undisputed kingdom of its proprietor, who reserves the right to serve hot dogs his way, which includes a nice spicy sauce a little on the hot side. By local tradition, said dogs are best eaten with chocolate milk to take a little of the edge off.

The dogs were great. And you take em like you find em. I pity the fool who asks for ketchup on a hot dog.

So if you're ever up that way, check it out and take what you're given. If memory serves, it's just a quick right turn from the courthouse down by the bridge. And speaking of the courthouse, inside it's the most beautiful one I've found in WV so far (and I've seen quite a few lately).

Note: I understand the hours at Yann's pretty much correspond to when the owner feels like being there.

HOW CAN YOU MEASURE LOCAL RACISM? Would you believe Google?

ZOMBIE LAND. This item asks what America's zombie mania says about us.