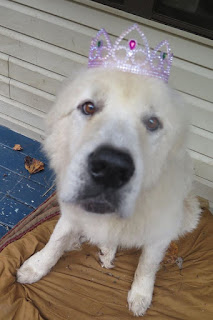 It's been a while since I went there, but this one of Arpad wearing a tiara is just too good to pass on. Some of us wear them better than others. (Photo credit: the Spousal Unit)
by El Cabrero No comments:

More it's not all bad

I'm trying to keep reminding myself of the positive things happening in WV right now--and there really are some. The latest example of good news is the vote by the Cabell County school board to offer free meals to all students starting next year and expanding the program to Huntington High immediately.

The county (my home turf) is already considered a national leader in child nutrition and opted for the Community Eligibility Provision (CEP) at the earliest opportunity. CEP allows for free meals to all students in schools where the poverty rate is at or above 40 percent.

The numbers are pretty huge. Cabell has 28 schools with an enrollment over 12,000. Huntington High alone has around 1,600 students.

This means that 20 of WV's 55 counties now offer free meals to all students. The majority of other counties (despite a diminishing number of holdouts) offer CEP to qualifying schools.
by El Cabrero No comments:

Requiem for a goat 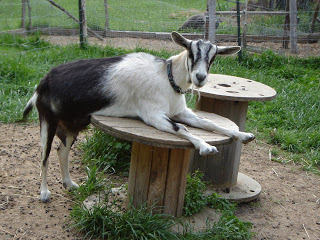 It is with heavy heart that I must report the passing of Arcadia Starlight Venus, doyenne of Goat Rope Farm and the initial inspiration for the name of this blog. She died at nearly 15 years of age, which is pretty old for a diary goat.

I still remember when she first came into my life. I had gotten back late on a Saturday night from a work trip around April Fool's Day 2005. My wife woke me up on Sunday morning with words that have sometimes caused me trepidation, to wit "Honey, come see."

There she was in all her glory.

From my earliest infancy, it has been the height of my ambition to be the partial owner/caregiver of a pregnant Alpine dairy goat. Imagine my delight in this first encounter. (Note: that was mild irony.)

My first thought was, who on earth would name a goat after the Roman goddess of love? But then I got it.

Venus turned out to be a delight, a sweet affectionate goat,  a good mother and grandmother and a good milker. Yes, she had that Alpine contrarian attitude, but she was a heart-breaker in her way. I must admit that she was the first goat I ever kissed...

(It's probably not a coincidence that according to Greek mythology Zeus, father of gods and men, was nourished in his infancy by the mother goat Amalthea. Or that the Norse god Thor rode in a chariot drawn by goats.)

Among her descendants at Goat Rope Farm are son Cornelius Agrippa, daughter Pina, and granddaughter Honeysuckle.

This song is for her.

I like to think that Venus has gone to the place where good goats go. I don't think it's very crowded, since in my experience there aren't all that many good goats.

Anna and I are sad tonight. We can only say, "Goodnight, sweet princess: and flights of angels sing thee to thy rest."
by El Cabrero No comments:

The Charleston Gazette-Mail's political report David Gutman, has been on quite a streak lately. In one recent article, he contrasted the centrality of coal to public discourse in WV with its relative absence on the national stage. Draw what conclusions from that you may.

In another, indirectly related, piece, he writes about how WV is one of a handful of states with a declining population. In fact, we lead the nation on that.

Apropos of nothing, the lyrics of a country song have recently come to mind: "If you're going through hell, keep on going."
by El Cabrero 1 comment:

It's not all bad, continued

I've been making a conscious effort here to highlight positive things happening in WV...when they happen. And they do. Here are two related bright spots:

Try This WV is an effort by many groups and individuals to promote healthy lifestyles, real (and local) food, and physical activity. The long range goal is to pull WV's abysmal health statistics out of the nether regions. Try This is a combination website, conference, mini-grant program and movement. This year it awarded more than $100,000 to local groups working on healthy projects.

One group with Try This connections that is making a splash in the northern panhandle is Grow Ohio Valley, which educates about food justice even while promoting local health food.

DEPARTMENT OF CORRECTIONS. Here's the correct link for the NY Times editorial on Don Blankenship/Massey Energy/Upper Big Branch that I mentioned yesterday but didn't properly link. My bad!

Two from the Times

I'm grateful to live in a state where we had a political leader with enough humanity to expand Medicaid coverage to nearly 170,000 low income working West Virginians. (Yes, that would be Gov. Early Ray Tomblin.) Unfortunately, that isn't the case in many states. If you want to see what the all too predictable pattern looks like, click here.

Meanwhile, the Times ran this editorial last week on the case of former Massey Energy CEO Don Blankenship, who is facing federal charges in the wake of the Upper Big Branch mine disaster which killed 29 WV coal miners.
by El Cabrero No comments: