Of the 99% spring, nonviolence, civil disobedience, Plutarch and the Spartans

I've been reflecting lately on the 99% Spring campaign lately, which aims to train 100,000 people in nonviolent direct action in April. Earlier posts are here and here.

One good decision on the part of the campaign was to try to convey the range of possibilities for nonviolent action without really getting into civil disobedience. That is a topic of its own and requires a great deal of planning and preparation to be successful in the best case scenario.

While it can at times be a very powerful thing, in my opinion, civil disobedience is an option that is greatly and grossly overused. Some people apparently think that you get points for getting arrested. You don't. As I see it, you get points for winning. Some people use civil disobedience not as a last resort but as a first resort when they haven't even come close to exhausting alternative strategies. Sometimes it seems to me that it's the refuge of the politically inept.

This is the martial artist in me talking, but the value of a technique generally diminishes with its repetition. Habituation happens. If you overuse one technique you become predictable and your opponents can easily counter and/or dismiss it. The last reaction a group working for social change wants is for people to say, with a sigh of boredom, "there they go again."

Random classical digression....This train of thought was inspired yesterday as I was re-reading Plutarch's Lives. I'm on the life of Lycurgus, the ancient lawgiver of Sparta. The author states that the Spartans made it a policy that

"they should not make war often, or long, with the same enemy, lest that they should train and instruct them in war, by habituating them to defend themselves."

(Random historical digression...Eventually the Spartans failed to follow this advice, which resulted in them getting their butts kicked by the Thebans.)
by El Cabrero 1 comment:

Since I mentioned the 99% Spring campaign last time (click here for that), I might as well throw in a few more thoughts about this effort to take training in nonviolent direct action to 100,000 Americans Here goes...

*First, hell yeah. This is a good idea, long overdue.

*Second, let's deal with the co-optation question. I know that some people who are political purists are concerned about the involvement of many organizations regarded as "mainstream" in the effort, as if being mainstream is an evil in itself.  I tend to regard purity as the unforgivable sin in politics so I've never been able to work up much sympathy for it. (In fact, isn't the whole idea to make things like social justice or human rights a mainstream idea?)  I will publicly state that if co-optation means getting ideas out to a broader audience than a select few, I wish to God that more such ideas get co-opted.

*Third, I hope the people who planned this didn't go to all the time and trouble of developing a curriculum, training trainers, and holding gatherings all over the country just to do some actions on Tax Day, which probably would have already happened anyway. It makes a lot more sense to me if this campaign is an ongoing and possibly long term effort. It might even be cool not only to take the show on the road for a long time but also to develop additional trainings to help people develop skills in working for social justice. Otherwise, it seems like kind of a waste of good energy.
by El Cabrero No comments:

Of nonviolence, the 99% Spring, and such 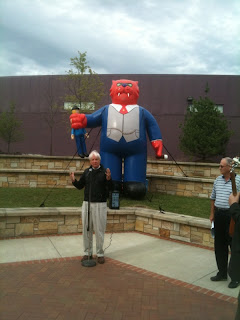 Rev. Jim Lewis invokes the spirit at a Tax Day action in Charleston yesterday. (Note: he's the guy in front, not the big orange cat strangling a worker.)


All over the country, people gathered yesterday in nonviolent actions to call for tax fairness. This is part of a massive effort by many groups under the umbrella of 99% Spring, which has the goal of training 100,000 people in nonviolent action in April and mobilizing people to take it to the streets.

I attended one of the training events and found it to be a pretty good introduction to nonviolent action for people new to it. You can check out a lot of the materials and video at the website above. I do think, however, that the trainings would be stronger if they included a few other elements.


1. a good brainstorm about why to be strategically nonviolent to start with. Trainers should be sure that the following points get made:

*that generally speaking the wealthy elite have direct or indirect control over the state with all its machinery of repression, as in police, military, jails, courts, etc. and that it's pretty stupid to try to meet force with force when you don't have any;

*that generally speaking violence is a turnoff for most people; and

*that acting violently (or stupidly in general) gives the powers that be an excuse to dismiss, discredit and repress the group.

2. A basic understanding of politics in general. By this I mean that it's good to get across the idea that on any given issue a minority of people feel strongly about an issue one way or another while a much larger groups has no opinion at all or is somewhere in the middle. A good action or campaign is one that brings people your way and isolates your opponents. This is true of ordinary politics and policy work. of the arts of persuasion, and of direct action in general. There is nothing magic about nonviolent action: if it doesn't make sense politically it's better to do nothing. I have seem plenty of useless, stupid and counterproductive actions.

3. A basic understanding of power.  A central tenet of nonviolent theory (and politics generally) is that power isn't monolithic. It depends on the support and cooperation of all kinds of people and institutions. Even the most powerful dictator or ruling class depends on many other people to keep things running. These are often called "pillars of support." A good nonviolent campaign is one that withdraws the pillars of support (see #2).

Conversely, you can do all the nonviolent protest you want but if it is done without political sense and strategy it may just convince the pillars of support that you want to remove that your group is just a bunch of whack jobs.

It shouldn't take more than a few minutes to get these ideas across in any kind of training and I think it would strengthen the overall effort. 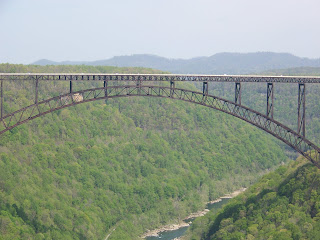 There are a lot of beautiful places in El Cabrero's beloved state of West Virginia and I just got to spend a little time with family in one of them, to wit Fayette County in and around the New River Gorge. In lieu of trying to write some semi-serious social commentary, let me just say that at one point we hiked a trail near Fayetteville to a great view of the Gorge and of the famous bridge that crosses it. Yes, that would be the one they parachute off of (sorry about ending that phrase with a preposition). 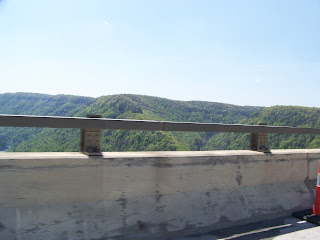 A little later, as we crossed the bridge, the Spousal Unit snapped a picture of the overlook at the spur of the mountain in the middle. Between the two, there is a whole lot of down. If you've never been to the area, drop everything and hit it ASAP. There is something magical about the place.

SCORE ONE FOR F. SCOTT FITZGERALD, who wrote in so many words that the rich are different. That's especially true these days when it comes to taxes.

THE BUFFETT RULE. You've probably heard about it and will hear more on Tax Day. Here's a starter.