Sometimes a picture says it all 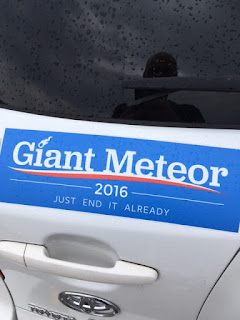 Some days that sounds pretty good to me...
by El Cabrero No comments:

I don't know how I missed this, but apparently back in May Texas congressman Louie Gohmert went on an epic rant against...gay space colonies. Apparently, the issue would be that if the future of the human race depended on a small number of people in a space station and they were like gay or something, we'd all die out. So there.

"You’re wanting to save humankind for posterity, basically a modern-day Noah. You have that ability to be a modern-day Noah, you can preserve life. How many same-sex couples would you take from the animal kingdom and from humans to put on the spacecraft to perpetuate humanity and the wildlife kingdom?”


I mean, like think about it, if Noah just put same sex gay animals on the ark, what would we eat at Arby's besides cheese sticks and curly fries?

(I wonder if Gohmert has put two and two together and thought about the other major danger to the space station: transgender space people using inappropriate space bathrooms.)
by El Cabrero 1 comment: