Metaphorical rule of life short enough to be a tweet

Don't put on the tee shirt until after you finished the race.

JUST ONE LINK. It asks a good question, with lots of good discussion.

From the office of Governor Earl Ray Tomblin:

CHARLESTON, W.Va. –Gov. Earl Ray Tomblin today announced the changes proposed earlier this year for the eligibility levels of child subsidy will be tabled for further review. The funding formula changes were made in an effort to compensate for shortfalls in federal funding. The Governor plans to submit a supplemental appropriation next year to help close the gap through the spring and has plans to work with all parties to find a solution for making this program successful long term.

“After much discussion with parents and folks in the childcare industry, I decided it’s not in the best interest of West Virginia families to move forward with the scheduled changes to our state’s childcare subsidy,” said Gov. Tomblin. “We still have work to do; these programs are not sustainable with our current level of funding, but at this point, I believe it’s best to keep hard-working families in the program and to look for other ways to address the budget shortfalls.”

West Virginia Department of Health and Human Resources officials announced in June 2012 that the ceiling for eligibility would be reduced from 185% of federal poverty level to 150%. This change was scheduled to go into effect on January 1, 2013. Today’s announcement means that no change will be made at this time and the entry and exit levels will remain the same, thus retaining families who are at or below 185% of the federal poverty level. The changes to the copayment structures announced earlier this year will go into effect on January 1, 2013.

Here's a heartfelt "thank you" to Governor Tomblin and his staff and a hearty "Congratulations!" to everyone who worked on this issue over the last year or so!

That's a nice Christmas present.
by El Cabrero No comments:

The most interesting tweet I've read for a long time is this one written in response to the carnage in Connecticut:

One guy tries to use a shoe bomb = everyone at the airport takes their shoes off. 31 school shootings since Columbine = nothing we can do.

The carnage was so bad that even longtime NRA supporter Joe Manchin thinks something has to give.

RACHEL WEEPING FOR HER CHILDREN, Holy Innocents, weapons, and nonviolence are discussed in the latest edition of the Rev. Jim Lewis' Notes from Under the Fig Tree.

Fish day! and other signs of life 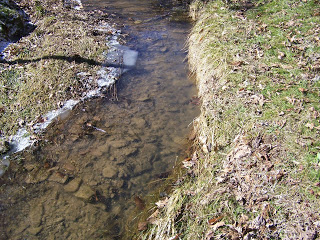 A lot of people around the country and beyond are thinking about the carnage in Connecticut, as am I. But two events this weekend reminded me about the persistence of life as well.

Today, Dec. 16, 2012, was officially declared Fish Day at Goat Rope Farm. By way of explanation, during the winter, spring and early summer, the creek that runs by our place is teeming with minnows, crawdads and such. But the dry spells of late summer often dry the creek totally up for weeks or more at a time.

After a while, the water returns. Shortly thereafter, aquatic insects do the same. But fish usually take a while. Fish Day here as occurred in February but sometimes as late as April. For some reason (would that it was an omen of good tidings), it came early this year. This morning, I caught a glimpse of a solitary minnow but didn't trust my eyes. I thought I saw it again this afternoon but waited until seeing it again this evening before calling it.

Life goes. But it also comes back.

The other reminder was the December ritual of planting garlic, the only vegetable I seem to get along with very well in the gardening arena. In a time of year when much seems dead, putting perfectly good garlic cloves in the ground seems like a total waste. One expects them to molder and disappear, but they tend to sprout up in spring and grow to maturity in summer. Life out of death again.

I'm reminded of a Springsteen lyric from the song Atlantic City. You may well know the one.