Sugar is the new tobacco

This op-ed of mine ran in yesterday's Charleston Gazette-Mail:

When legislators start scrambling to fill West Virginia’s budget gap next year, they would do well to consider raising the tax on sugary drinks. And maybe finishing the job on the tobacco tax.

There are plenty of reasons to consider this option, but here’s one to start with: sugar is the new tobacco. In more ways than one. And tobacco is the old sugar.

But, let’s start with the old one. According to the Centers for Disease Control and Prevention, cigarette smoking is responsible for more than 480,000 U.S. deaths per year.

For comparison, consider this: that’s more than twice the number of Union and Confederate soldiers killed or mortally wounded in battle in the whole Civil War (around 110,000 and 94,000, respectively).


The CDC estimates economic costs to be more than $300 billion per year, including $170 in direct medical costs and $156 billion in lost productivity.

That’s bad enough, but many Americans may have forgotten how the tobacco industry knew about the danger of smoking but suppressed the information to protect profits and delay regulation.

As James Surowiecki wrote in The New Yorker, industry researchers “had demonstrated the addictive qualities of nicotine and the health hazards of smoking years before these things became public knowledge, and that tobacco companies had nonetheless embarked on a public campaign to deny what they knew to be true, from their own research, and to cast doubt on the dangers of cigarettes.”

It has recently come to light that the sugar industry was up to the same tricks for years.

According to a recent article in the Journal of the American Medical Association Internal Medicine, more than 50 years ago, sugar industry interest groups became concerned about research on the dietary causes of coronary heart disease, especially those that linked illness and early deaths to sugar intake.

Over a period of decades, the industry dumped a few million dollars on P.R. and “research,” including funding for Harvard scientists who minimized the role of sugar and cast fat as the villain. The scientists didn’t disclose any possible conflicts of interest.

As far back as the 1950s, one influential industry leader argued that “sugar is what keeps every human being alive and with energy to face our daily problems.” In effect, the industry paid for research to back up their claims.

You get what you pay for. Or the industry did anyhow. As the authors of the JAMA article note, “by the 1980s, few scientists believed that added sugars played a significant role in CHD, and the first 1980 Dietary Guidelines for Americans focused on reducing total fat, saturated fat, and dietary cholesterol for CHD prevention.”

If you’re old enough to read this, you probably remember the “low-fat” marketing craze that really took off in the ’90s and hasn’t entirely gone away.


This isn’t to say that fat is a new health food, but it’s hard to deny that the low-fat craze helped lead to the high-carb diets that have contributed to the nation’s — and especially West Virginia’s — obesity crisis, which is taking its own toll, in terms of health and financial costs.

Back in 2008, health care policy expert Ken Thorpe was commissioned to advise the Legislature on how to improve the state’s physical (and ultimately fiscal) health. At the time, he noted that we spent 13 percent more per person on health care than the national average.

He also noted that “Data from the U.S. Centers for Disease Control and Prevention indicate that West Virginia has among the highest rates of childhood and adult obesity in the country. These high rates of obesity are associated with high and rising rates of diabetes, hypertension, hyperlipidemia, heart disease, pulmonary disorders and co-morbid depression.”

In a 2009 report titled “The Future Costs of Obesity,” Thorpe reported that obesity-related diseases cost West Virginia $668 million in 2008, a number he expected to rise to $2.4 billion by 2018 if nothing changed.

It’s hard to get up-to-the-minute data on this, and some progress has been made, but it’s clear the public health threat is still with us.

The death toll hasn’t reached Civil War levels, but damage has been done, and our children have been among the targets. In 2012, nearly one in four West Virginia fifth-graders already had high blood pressure, according to West Virginia University measurements of thousands of children. One in five kindergarteners were coming to school obese and were at risk of type 2 diabetes. Nearly one in three adults were obese. According to Try This West Virginia, a campaign to promote healthy lifestyles, seven out 10 health care dollars were spent on preventable diseases.

Let’s just say that if another country had done this to our kids, we’d be at war.

I’m no purist about this stuff. I’m a former smoker and I consume sugary drinks (although you have to be 21 or older to buy most of them), but let’s face some facts.

Budget crisis or not, imposing a tax on things that kill us might not be a bad idea. Part of the revenue could go to addressing the medical costs these things cause. And if, over time, we consume less of them and suffer less harmful effects ... well ... that would be a good problem to have.

More not all bad

It these days when news stories of the tragic killing of African Americans in encounters with police and ensuing unrest are all too common, there is major good news on the police/community front right here in West Virginia.

At a press conference today, the Charleston Police Department along with community allies (including AFSC and our partners such as Our Children Our Future, the WV Coalition Against Domestic Violence and others) announced the rollout of a very ambitious program aimed at easing racial tensions and promoting police community relations.

Among the proposed action steps are these:

*Publishing monthly arrest statistics across race, age, gender and cause of arrest to promote transparency.

*Introducing body camera technology in November, which will protect both police and citizens.

*Launching a Youth Advisory Council this month  to be made up of about 10 young people, ages 18-25 of different races, who will meet with officers  to discuss recommendations to improve community-police relationships.

*Holding anti-racism training for all officers.

*Conducting roll call presentations so that officers can meet and hear from Charleston leaders.

*Advocating state policy changes to address re-entry and recidivism to give ex-offenders a chance to be a productive citizen.

This is pretty huge. Congratulations to all involved and here's hoping for a successful implementation. This could be  a model for the nation.
by El Cabrero 1 comment:

A tale of two counties and more 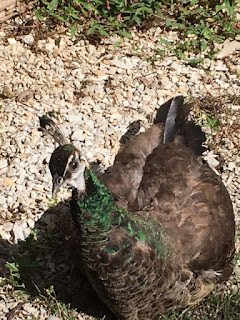 First a correction. In yesterday's post, I reported that Pearl, our aging peahen, was killed by a predator. I'm happy to report that, while she was indeed attacked the other night, the Spousal Unit found her intact with a little help from our box Bo. Apparently Pearl, who is pretty much blind, wandered into a creek and couldn't find her way out. So there's that anyway.

Meanwhile, here's a tale of two counties that sheds a lot of light on the current situation of West Virginia. First, here's a sad tale of meltdown in Boone County in the wake of the collapse of coal. It's so bad that the school system can't afford to buy science books. With just one county between them, the county seat of Fayetteville in Fayette County, another traditional mining area, has rebuilt its economy around outdoor activities. Of course, Boone would have an easier time of it if the New River flowed through it.

Finally, if you just can't get enough of the discussion of Hillbilly Elegy, here's another take by way of Jacobin magazine. 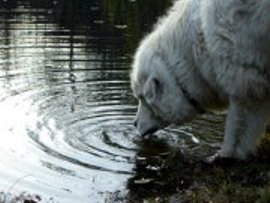 Since the passing of Arpad the Magnificent this summer (pictured above), predators have already started moving in. A couple nights ago, we were awakened when an unknown critter attacked Pearl, our aging peahen. Last night she disappeared. This would have been unthinkable in Arpad's heyday.

It makes me think that all our lives would be a lot less safe without the often unseen restraining hands (or paws) of those who, without fanfare, keep things from being as bad as they could be.

(Note: not all of the good guys who faithfully lived a hidden life were as glorious or beautiful as Arpad. They probably didn't bark as much at night either. Come to think of it, I visited Arpad's tomb tonight and poured him a libation of goat milk. But the point remains I think.)

OFF TOPIC. Here's a final digression of grieving for a dog. After he died, I dreamed that I climbed a mountain and looked down. There was Arpad and some other dogs I knew who had passed running around and having a great time. I tried to climb over the mountain to them but it was too steep and I couldn't cross the line.

I think that may have been a classic Freudian albeit nonsexual wish fulfillment dream of good dogs living forever. I wish it was real. Or that, in the Buddhist spirit, Arpad had been reborn in the Pure Land of Amida Buddha, where he could work towards ultimate Nirvana under the most favorable circumstances. Or that I could ever be as cool as he was.
by El Cabrero 1 comment: