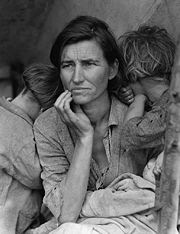 "Hard times, come again no more," goes a line of a famous song by Stephen Foster--but it looks like they have.

(By the way, here's Dylan doing it live.)

The economic downturn and recent research El Cabrero and friends did for a study of The State of Working West Virginia over the last 30 years reminded me of the Dark Ages of the 1980s. It was a time when globalization and Reaganomics hit my state like a tsunami. As I mentioned in Friday's post, unemployment was in the double digits for most of the 1980s and early 1990s.

At the time, I had yet to finish college, was working a low wage job and had two small children. It was bad. Real bad.

Like the guy said in the Big Lebowski, some days you eat the bear and some days (decades?) the bear eats you. And help was not on the way. Hope, which the divine Ms. Emily Dickinson described at "the thing with feathers" seemed to have flown the coop.

I hope this time there might be a little help on the way, but long ago I took to heart the words of the great Japanese swordsman Miyamoto Musashi:

"Pay your respects to the gods and buddhas, but never rely upon them."

So here's the question I'm going to be dealing with for the next little stretch: how does one, on a purely personal level, endure hard times when the cavalry isn't going to come and when there is no social movement to save you?

FREE FALLIN'. The US economy dropped over half a million jobs in November and more than 1.2 million in the last three months according to the Center for Economic and Policy Research.

SITTING IN. Here's an update about a sit-in by union workers in a closed Chicago factory.

MEGAN WILLIAMS UPDATE. All seven people accused of torturing Megan Williams in Logan County have been convicted. Here's an overview.

PAID UP. Massey Energy paid Wheeling-Pittsburgh Steel $267 million after the US Supreme Court overturned a previous decision by the WV Supreme Court. Previously, the state court overturned the verdict against Massey, with Justice Brent Benjamin casting the deciding vote. Benjamin, a political unknown, was elected to the court after Massey CEO Don Blankenship spent more than $3 million to defeat his opponent.

THE KINDNESS OF STRANGERS can make you happier.

COLLATERAL DAMAGE. The recession has taken a severe toll on recycling efforts.