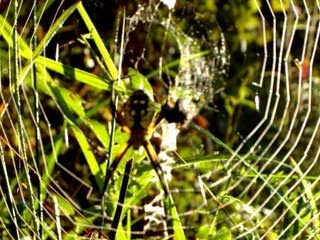 A SPIDER sewed at night
Without a light
Upon an arc of white.
If ruff it was of dame
Or shroud of gnome,
Himself, himself inform.
Of immortality
His strategy
Was physiognomy -- Emily Dickinson

Comment: I have no idea what that means but if Emily said it, it must be cool.

When a god comes to town, be nice

"...he will know too late Dionysus, god most benevolent to mortals, yet if his blessing is scorned into curse, god of inhuman terror."--the Bacchae

Goat Rope's series on Everything You Always Wanted to Know (or not) about Greek Tragedy continues. If you like this kind of thing, please click on earlier posts. If you're just interested in links and comments about current events, scroll on down.

Earlier posts in the week looked at the background of tragedy and Dionysus, the god at whose festival these were performed. It only seems fitting to start looking at specific tragedies with one in which he has the starring role. That would be the Bacchae, which may have been the last play written by Euripides, the most recent of the three tragedians whose work survives.

In it, Dionysus is newly arrived from Asia to Thebes, the home of his mother Semele. The former king of Thebes was Kadmos, Dionysus' grandfather, who was pious enough to recognize that Zeus was the new god's father and to honor his mother with a shrine. Semele's sisters, however, disbelieve and have spread rumors that his father was human.

The new ruler of Thebes is Kadmos' grandson Pentheus, who is...well...a bit of a wanker: young and arrogant, he is dismissive of the new cult and prepared to suppress it.

Dionysus, looking like a dissolute and androgynous youth, strikes the women of Thebes with his divine mania. They abandon their homes and revel in the mountains, tearing calves to pieces in their frenzy. Pentheus tries to arrest the youth, but you can't arrest a god. The city is destroyed by an earthquake. Not able to take a hint, Pentheus threatens to send soldiers to suppress the revelers.

Still, he kind of wants to watch. Dionysus tempts him by offering to lead him to a safe place to view the scene. The wild women or maenads, lead by his mother Agave, see him and think he is a mountain lion. They tear him to pieces in their mania and triumphantly bring the remains back to the city in triumph. Only when the madness fades does she realize what she has done.

"Humility and respect for the gods is the only wisdom. Yes, and for us mortals, the only weapon in hand--if only we used it."

GOOD LOOKS can boost your paycheck.

DEPARTMENT OF CORRECTIONS. This is the article about the mismatch between new jobs and workers seeking work that I meant to link yesterday.

NEANDERTHALS may have been pretty smart after all.

The new god on the block 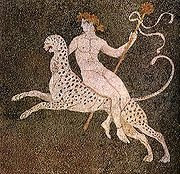 Welcome to Goat Rope's ongoing series on Everything You Always Wanted to Know (or not) About Greek Tragedy. If you want to skip that part, there are links and comments about current events below. If you like this kind of thing, please click on earlier entries.

As mentioned before, Athenian tragedy was performed as part of the festival of the god Dionysus, the god associated with the vine, wine, growing things, ecstasy and other fun stuff. The situation of his birth was described in yesterday's post.

His childhood was a bit rough as well. According to some myths, Hera, the jealous wife of Zeus had him ripped to pieces (like a grape maybe?), but he was reassembled by his grandmother Rhea.

Once he was mature, he went from place to place introducing grape cultivation. He was followed by wild women or maenads who flouted social conventions, tore wild animals to pieces for food and carried a rod tipped with pine cones which was a symbol of the cult.

I kind of picture Dionysus as being a bit like Jim Morrison in his prime. And when he came to town, it was kinda like a really wild Doors concert, only more so. Women would abandon hearth and home to head out to the wild places.

He was also one of the few gods who had the power to bring people back from the dead. He rescued his mother Semele from the underworld and secured immortality for her. For this reason, he was sometimes associated with mystery cults aimed at securing some kind of decent life after death for humans.

He was not a war god or even overly sexual (by Olympian standards), but woe to anyone to tried to obstruct the progress of his cult. That's the subject of a tragedy by Euripides, about which more tomorrow.

SOCIAL SECURITY. Here's Robert Reich on the health of this New Deal program.

HELP WANTED? Here's Business Week on the mismatch between workers seeking work and the jobs that are out there.

PERFORMANCE PAY isn't all that common in the private sector, according to the Economic Policy Institute. 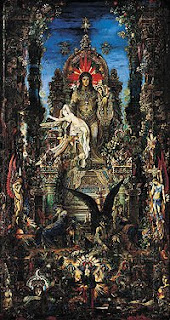 Welcome to the latest installment of Goat Rope's Everything You Always Wanted to Know about Greek Tragedy (or not) series. Below you'll find links and comments about current events and the occasional random item.

As mentioned previously, tragedies in Athens were performed during the spring festival of the god Dionysus, who is associated with wine, the vine, growing things, mass frenzy, and other cool stuff.

Dionysus is interesting among the gods. According to some evidence, his cult is ancient and may even go back to the heyday of Cretan civilization. But in the myths, he is generally portrayed as a recent arrival.

As the story goes, he was the product of an affair between Zeus and the human woman Semele, daughter of King Kadmos of Thebes. His jealous wife Hera got wind of the tryst and disguised herself as an old woman who told Semele that she should require her mysterious lover to reveal himself in his true nature and form. When Zeus paid another visit, she begged for this favor and denied him access to her bed with he refused it.

In another example of a Be-Careful-What-You-Ask-For myth, Zeus in anger and frustration appeared as thunder and lightning and burned her to a crisp. With the help of the god Hermes, Zeus sewed the six month old fetus of the future god into his thigh, from whence he was born in three months. This earned him the title of the "twice born."

He thus stands in marked contrast to the wisdom goddess Athena, who was born from Zeus' head. He works on a lower level, but is not without wisdom and power of his own.

More of his story to come.

FIVE TO ONE. That's the number of job seekers for every new job, according to the Economic Policy Institute.

TRICKLING DOWN (FOR REAL). Stimulus money has started flowing to states but only about six percent has been spent so far.

DON'T PLAY THEIR GAME. According to Malcolm Gladwell, underdogs can win if they don't play by the big guy's rules.

The Greek theater at Epidaurus. Image courtesy of wikipedia.

Welcome to Goat Rope's latest series on Everything You Always Wanted to Know (or not) about Greek Tragedy. You'll also find links and comments about current events below. If you like this kind of thing, please click on earlier posts.

As mentioned previously, Greek tragedies were originally performed during the spring festival of the god Dionysus. Attendance was a civic and religious duty for Athenian citizens. It involved a contest between three playwrights who produced three more or less related plays and a lighter and cruder satyr play.

What's really tragic is that so few Greek tragedies have survived. Of the three tragedians whose work survives, we only have

*eighteen or nineteen by Euripides (circa 480-406 BC) out of more than 90. The authorship of one of these is disputed.

The works of other tragedians has been completely lost. There's only instance of a trilogy surviving intact, the Orestes plays of Aeschylus.

Many of the ones that do survive are really, really good. It makes you wonder about what we lost.

If you read the works by author and compare, you'll notice that they seem more recognizable as plays as time goes by. Euripides seems really "modern" compared to Aeschylus.

People at the time were crazy about the stuff. It is said that the very few Athenian soldiers who survived that disastrous invasion of Syracuse during the Peloponnesian War were the ones who had memorized the latest by Euripides.

Who said this stuff wasn't practical?

WHEN UNEMPLOYMENT GOES UP so does poverty.

SPEAKING OF UNEMPLOYMENT, here's one by Barbara Ehrenreich on what to do with the extra time.

SPEAKING OF THE RECESSION, here's Nobel laureate Joseph Stiglitz on where we are now.

TORTURE. Here's an analysis of how Americans think about it.

WEIGHT LOSS. It's no picnic. 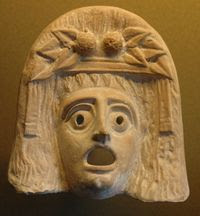 A mask of Dionysus. Image courtesy of wikipedia.

It's an unfortunate turn of language these days that we use the word myth to denote falsehoods or misconceptions, as in "the myth of the free market" or whatever. I'm more inclined to the saying I've seen attributed to various people that goes something like "myths are things that never were but always are."

Thomas Mann, to whom some attribute the thought expressed above, put it like this:

For the myth is the foundation of life; it is the timeless schema, the pious formula into which life flows when it reproduces its traits out of the unconscious.

Some of the most powerful expressions of myth are those developed in Athenian tragedy, an art form that reached its pinnacle in the 5th century BC. As mentioned previously, tragedies were performed as a competition during the spring festival of Dionysus, a god associated with wine, growing things, and ecstasy.

The form developed over time from dithyrambs or choral singing in honor of the god to the recitation of stories from various mythic traditions. Over time, an actor was added to answer the chorus. The English word for hypocrite, by the way, comes from the word for this actor. The tragedian Aeschylus added a second actor, Sophocles a third, and Euripides still more, so that the product is recognizable to modern readers as a play.

Greek tragedies often portray people caught up in a long series of events which they imperfectly understand or understand only when it's too late. Sometimes, they show the disastrous results of excess or a lack of holy moderation which bring on the wrath of the gods.

Far from being something removed from real life, I see tragic themes being played out over and over again in history, politics, family and personal life. Over the next stretch of time, Goat Rope is going to take a look at the surviving tragedies and what they might say to us today.

GREAT FIRST LINE. This article about how Americans are landing on or falling through state and local safety nets says it all:

As millions of people seek government aid, many for the first time, they are finding it dispensed American style: through a jumble of disconnected programs that reach some and reject others, often for reasons of geography or chance rather than differences in need.

TALKING BUSINESS. Here are two items El Cabrero and amigos are working on right now. One is the need to take advantage of stimulus money to help WV deal with its budget problems and the other is about the state's unemployment insurance system and how we can improve it.

WALL TO WALL. Here's the latest edition of the Rev. Jim Lewis' Notes from under the Fig Tree. It's all about walls from wall to wall.

BABOONS are socially smart. Some even make good goat herders. Wait a minute! Don't read this.