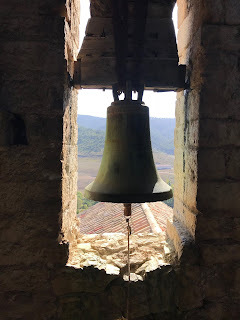 One of my favorite Dylan songs is Ring Them Bells, a spiritual and prophetic  song from Oh Mercy. I had a Ring Them Bells moment on day 3 of the Camino de Santiago in Spain. About 40 some miles from St. Jean Pied de Port on a hot day, the arrow marking the trail led straight up a nasty hill. The place was Zabaldika.

At that point my legs screamed in protest at the slightest incline. But I came here to follow the Way so up I went.

At the top of a hard climb was a church built in the 13th century, before Dante penned the Divine Comedy.

An elderly woman there beckoned me to enter. It was like she was waiting just for me. I tied to refuse but she wasn’t having it. She led me in the empty church and played recordings of medieval chants. Then she guided me to a seat and gave me a laminated sheet with the history of the church and a page I could keep of Camino prayers and blessings.

I intended to attend to the spiritual aspects off the Camino but had been too rushed up to that point. This was a bit of a reset.

The church was dedicated to St. Stephen. Above the altar were statues of Christ, the Virgin, Stephen, and assorted saints. I just went with it.

After a period of silence, I prepared to leave, but she wasn’t having that either. She pointed to the stairs of the bell tower and told me to climb it and ring the bell two times and really hear and feel it.

It was a spiral stone staircase built like a screw that I had to craw up on my hands and knees. At the top was a huge iron bell. I rang it once and gave myself to the sound (Buddhists, yogis and meditators will know something about this).

It was a beautiful moment, but she wasn’t done with me. She took me to a statue of the crucified Christ and showed me where hundreds of others had posted their thoughts and prayers, I did the same.

By then she was ready to let me go. I thanked her and left with tears in my eyes.If I wasn’t so shut down, I would have cried for a hour or so,

For Alanis fans and viewers of the movie The Way, it was a “Thank You”moment..

(Note: I had to pay for that with several hours of heat and pain and bad food and thirst. But as Dylan said, ‘pay for your ticket and don’t complain.)
by El Cabrero 2 comments: 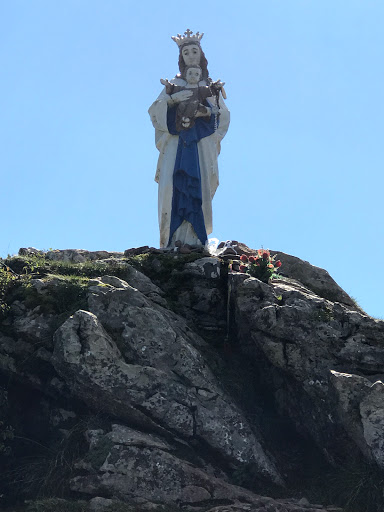 Ever since I got bit by the Camino bug I imagined and dreaded what day over the Pyrenees from France to Spain. Let’s  just say I’ve done five marathons, eight distance runs, several long trail runs and some pretty intense martial arts stuff. This was the toughest by far.
The up was endless and the down almost made me miss the up. Day 2 to Zubiri was more manageable,although my boots were a casualty..
Whose whack idea was this, anyway?
by El Cabrero 1 comment: 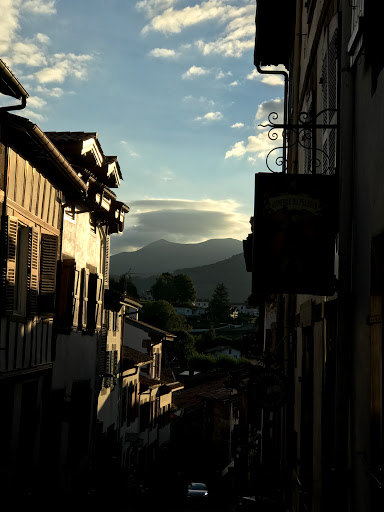 (St Jean Pied de Port in southern France. I don’t like the look of those mountains. They’re pretty and all but going up is gonna be a drag.)
I remember a cartoon about two Buddhist monks sitting in a meditation hall. The younger monk asks what happens next and the older one says “what do you mean? This is it!”
I think that’s a pretty good metaphor for life. We often act like we’re waiting for it to happen at some point in the future, but the older monk was right.
This is it.
I thought of that during the 24 hour or so period I’ve spent getting to starting point of the French Way or path along the Camino de Santiago in Spain (St Jean Pied de Port in the Pyrenees Mountains in southern France, where this branch of the 480 mile walk begins).
It occurred to me that the “real” pilgrimage doesn’t start in a cool Romantic place. It starts when you step outside the normal door.
The hassles of driving, scrambling thr

gough airports, delays, lines, sleeplessness, etc. aren’t just preliminaries any more than daily life is different from our real life.
This is it.
by El Cabrero 2 comments: