I'd like to be wrong about this, but the congressional "super committee" in charge of slashing the deficit seems to be composed of a mixture of bullies and appeasers in equal numbers. This means they are likely to spare the wealthy (the 1 percenters in the parlance of our times) and tax dodging corporations from any increased taxes while slashing the programs that help sustain the other 99 percent.

If that is the case, I think it would be a very good thing if the Occupy movement took up the cause and started kicking up some national dust, with a little help from unions and other friends. To paraphrase Che Guevara, "create two, three, many Oaklands!" (Nonviolently, of course.)

ONE NATION, DIVIDED. Here's Jim Hightower on the 99/1 thing.

VETERANS OCCUPY. This story is a day or so old but worth a look. Around the country, quite a few veterans are stepping up their involvement in the Occupy movement in the wake of the injuring of Iraq war vet Scott Olsen by police in Oakland, which helped spark that city's general strike.

THE R WORD. Here's another one on the future of the Occupy movement.

Regarding marriage and the Decline and Fall of the Roman Empire 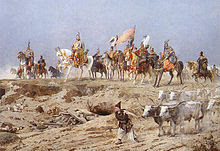 Here come the Magyars! A painting of Prince Arpad and his followers crossing the Carpathians by way of wikipedia.

For several years, I've been making my way, a little at a time, through the unabridged version of Gibbon's Decline and Fall of the Roman Empire. I'm not sure why, exactly, but it might have something to do with the ability of the author to turn a phrase. They knew a thing or two about that in the 18th century.

I've gotten through most of it and only have a scant 500-600 pages to go. Some parts are a slow slog, but my interest picks up here and there.

Recently, I've stumbled upon a section directly relevant to my marriage. Some years a go, I committed matrimony, as my late father used to say, with a female of Hungarian extraction. A Magyar if you will.

A few days back, I got to Gibbon's discussion of the migration of the Hungarians into Europe and took great delight in reading them aloud to the Spousal Unit. Here are a few sample passages that I rushed to share:

When the black swarm of Hungarians first hung over Europe, about nine hundred years after the Christian era, they were mistaken by fear and superstition for the Gog and Magog of the Scriptures, the signs and forerunners of the end of the world.

Except the merit and fame of military prowess, all that is valued by mankind appeared vile and contemptible to these barbarians, whose native fierceness was stimulated by the consciousness of numbers and freedom....Their simplicity has been praised; yet they abstained only from the luxury they had never known: whatever they saw they coveted; their desires were insatiate, and their sole industry was the hand of violence and rapine.

...mercy they rarely asked, and more rarely bestowed: both sexes were accused as equally inaccessible to pity; and their appetite for raw flesh might countenance the popular tale that they drank the blood and feasted on the hearts of the slain.

I thought she would be pleased by this affirmation of her heritage and my efforts of cultural competence, but it didn't seem to work.

I guess you just can't be nice to some people.

THE STATE OF THE YOUNG. Here's an interesting report on how young Americans are doing.

A CERTAIN DISGRACEFUL CONGRESSIONAL COMMITTEE is meeting to see how much damage it can inflict on the American people...if we let it.

There are certain jokes, not particularly funny, which have become mandatory in and around Goat Rope Farm. Many though not all have their origin in movies. Over time, these have acquired an almost ritualistic significance and are triggered by certain conversational cues.

I am passing them on in case people out there are running short of ways of messing with and otherwise irritating the people they encounter.

*When someone comes up with a steaming pot and says "Coffee?," the obligatory reply is "Yes, I know." (Source: Airplane and the Naked Gun movies)

*When someone says "Can I ask you a question?," the obligatory reply is "You just did."

*When someone says "I'm going to go change," the obligatory reply is "Don't you go changing."

*Finally, anytime someone asks what to do with something or where to put it, the obligatory response (from Five Easy Pieces) is "Hold it between your knees."

TAXING FINANCIAL TRANSACTIONS sounds like a winner, but it faces an uphill climb in the US.

MORE ON THAT ONE PERCENT THING here.

Silly is the new serious 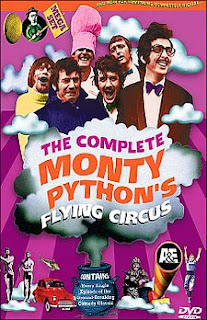 I have always had a distaste for the strident, which can be an occupational hazard (no pun intended) among people who work for social justice. That's why I find the levity in recent Occupy Wall Street protests refreshing, one example of which involves people parading around dressed as zombies. As this article, titled "Gandhi Meets Monty Python" suggests, there's a lot of that kind of humor going on these days all over the place.

Regular readers of Goat Rope will perhaps recall similar silly actions with a point in West Virginia. A few years back, when the then governor was messing with Medicaid, several of us held a bake sale for Medicaid that made around $100 bucks. That was silly enough, but then we got a big check printed and arranged a ceremony, with media in attendance of course, in which we presented the proceeds of the sale to the state treasurer's office.

This summer, on the anniversary of the Bush tax cuts, we held a Bake Sale for the Really Rich, complete with street theater. The state AFLCIO liked the idea and held hot dog sales around the state on the anniversary of the creation of Social Security. Dogs were sold at 1935 prices to raise federal revenue in order to spare the very wealthy from having to pay their fair share. After that, another event was held in which the hot dog proceeds were delivered to the Bureau of the Public Debt in Parkersburg.

You can't be silly all the time, alas, but it is good to break things up and act in unpredictable ways.

IS THE CONVERSATION CHANGING? Maybe. 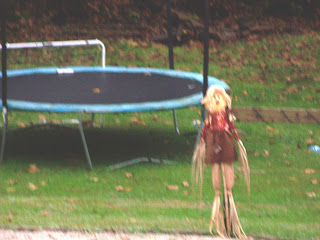 This year's buildup to Halloween featured a first in my experience: dogs fooled by seasonal decorations.

It happened one evening during the routine dog walk, in which boxer Edith and Great Pyrenees Arpad are usually joined by mut Smiley from down the road. As we were making our way to the end of the road and back for the usual two mile stroll, Edith and Smiley stopped in their tracks, hackles raised, and they growled across the field.

It took a while to figure out what they were growling at, but it turned out to be something on the order of scarecrows. I wasn't surprised that Edith would freak about some new sight--she has been known to bark and growl for 20 minutes at an ironing board--but Smiley is more street smart.

Eventually they got over it. But it occurred to me that many of the things we are afraid of in life turn out to be pretty much the same when all is said and done.

YET ANOTHER TAKE on the Occupy movement here. Oh yeah and here too.

WANNA EAT SOME BUGS? Some people are proposing insects as a cheap food source. I am less than enthused about the idea, but I figure we've all done it at some point unconsciously. I did deliberately try eating one spiced grasshopper in Mexico however.

SPEAKING OF BUGS, AND IN CASE YOU WERE WONDERING, yes, bugs are scared of fish.