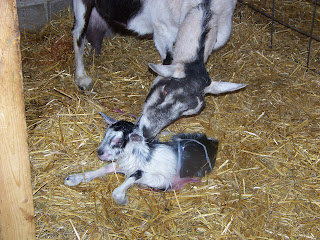 We interrupt our regularly scheduled programming to announce that Arcadia S. Venus, caprine doyenne of Goat Rope Farm, was delivered of two baby goats this Thursday, one male and one female. 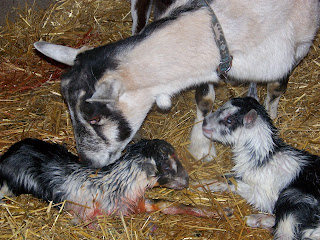 Since Venus' gentleman companion this time around was named King David, we felt we had no choice but to name him Solomon. 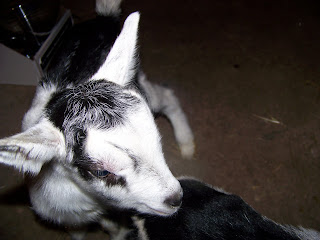 The Spousal Unit is on a Dante jag right now, so she named the female Beatrice. 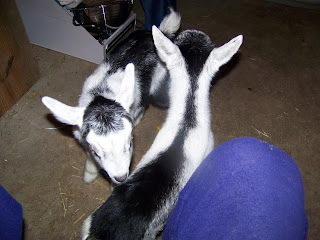 Uprooting the evil in the fields that we know

The Spousal Unit used to work for a social justice organization which shall remain nameless in New England. It was not unusual, depending on the news headlines, for people to call her up and scream "What are you going to do about Burma?" Or Bosnia. Or wherever the latest crisis was.
To my discredit, I found this to be hilarious. I mean no disrespect to anyone anywhere and don't mean to minimize global problems. But some people apparently believed that one could pull out pixie dust from some orifice and blow it halfway around the world and make everything OK.
We all have a limited reach and range of things which we can affect. That range will vary from time to time and situation to situation. Sometimes it might reach very far. But, as the Stoic philosopher Epictetus observed long ago, some things are within our control and others aren't. It makes more sense to me to focus on the things over which we have a degree of control.
(Did you guys notice the elegant way I avoided ending that sentence with a preposition? A preposition is a bad thing to end a sentence with.)
We can't do it all, but we probably can do some. Which leads to the last in a series of practical insights about working for social justice from The Lord of the Rings. As Aragorn, who knew a thing or two about a thing or two, put it,

...it is not our part to master all the tides of the world, but to do what is in us for the succour of those years wherein we are set, uprooting the evil in the fields that we know, so that those who live after may have clean earth to till. What weather they shall have is not ours to rule.

That's a pretty tall order as it is.
FIVE REASONS CONGRESSMAN RYAN'S BUDGET PROPOSALS ARE NOT COOL: this, this, this, this, and this.
MAKE THAT six.
THE BUTCHER'S BILL. Here's what gutting Medicare and Medicaid would mean for West Virginia.
ON THE BRIGHT SIDE, jobless claims dropped again.
YES, VIRGINA, THERE IS A class struggle.
GOAT ROPE ADVISORY LEVEL: ELEVATED
by El Cabrero 1 comment:

The tales that really mattered

I like to quote Vernon Johns, an African-American pastor who was a pioneer in the civil rights movement. His father told him, "If you see a good fight, get in it."

But it seems to me that the best or most righteous fights or struggles are not the ones that you go out looking for; rather, they are the ones that come to you.

In one of the more hopeless parts of The Lord of the Rings, the sturdy hobbit Sam Gamgee expressed a similar idea. Reflecting on the adventures related in old stories and songs, he said

I used to think that they were things the wonderful folk of the stories went out and looked for, because they wanted them, because they were exciting and life was a bit dull, a kind of sport, as you might say. But that's not the way of it with the tales that really mattered, or the ones that stay in the mind. Folk seem to have been just landed in them, usually--their paths were laid that way, as you put it. But I expect they had lots of chances, like us, of turning back, only they didn't. And if they had, we shouldn't know, because they'd have been forgotten. We hear about those as just went on--and not all to a good end, mind you; at least not to what folk inside a story and not outside it might call a good end...I wonder what sort of tale we've fallen into?

That's a good question. I wonder what sort of tale we've fallen into as well.

GREED IS IN, but that doesn't make it right.

JUST SAY NO. West Virginia Senator Jay Rockefeller came out swinging against Republican proposals to kill Medicaid and Medicare. To their credit, acting governor Earl Ray Tomblin and WV's newest senator Joe Manchin also oppose the plan. (Note: to get to the story scroll down after clicking on the link.)

TWO MINUTE WARNING. The clock is running out on a chance to modernize WV's unemployment system.

IN CASE YOU WERE WONDERING, dinosaurs probably had lice.

The estrangement that divides 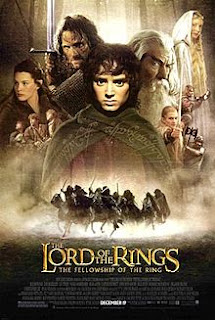 The theme here lately, aside from current events, is The Lord of the Rings and its practical relevance to people interested in social justice. I've just re-read it (for the umpteenth time) and made notes as I went along for this explicit purpose. If you like this kind of thing, click on earlier posts.
If there is any major message in the trilogy, it is about the importance of coalitions, both their potential strength and their fragility. Opposing the Dark Lord takes all kinds of allies: different groups of humans, elves, dwarves, ents, eagles, etc.
But in the books, as in real life, it is all to easy for alliances to wither and fall apart, even between groups that are or should be on the same side. Haldir, an elf, expresses this about 1/3 of the way through:

Indeed in nothing is the power of the Dark Lord more clearly shown than in the estrangement that divides all who still oppose him.

I can remember many struggles when people joined together to accomplish some goal or fight off some threat. When such a campaign is strong, people form bonds and may swear to always stick together and stay in touch. But time does its thing, other issues arise, people drift apart and sometimes find themselves on opposite sides of minor issues.
All this is probably inevitable to a degree, but this makes it harder for people to come together when they really need to. I guess one advantage of having a dangerous opponent is that this makes people join together whether they want to or not.

I guess the trick is to keep relationships intact in the relatively good times--if there are going to be any more of them--so that they will be there when needed.

KILLING MEDICAID. Here are some reasons why this is a really bad idea. SPEAKING OF BAD IDEAS, here's a brief statement from the Economic Policy Institute about why Republican congressman Paul Ryan's proposed 2012 budget is one. MORE ON THAT BAD IDEA here. A BETTER IDEA can be found here.
A YEAR LATER. The milestone of the one year anniversary of Massey's Upper Big Branch disaster brought renewed calls for mine safety reform.
GOAT ROPE ADVISORY LEVEL: ELEVATED
by El Cabrero No comments:

"We must do without hope"

The theme lately here is the social realism of The Lord of the Rings. And despite all the strange beings in those books, there is a lot of it.
As I mentioned in the past, Tolkien admired aspects of Norse mythology, especially the belief that gods and good men would fight against the force of chaos even knowing they were destined to lose and with no belief in ultimate redemption. He called this willingness to act without hope a "theory of courage."
I think the evils of our own day might call for that kind of courage. The theme shows up more than once in the trilogy. At one point, after the apparent death of Gandalf, Aragorn tells the Fellowship,

"We must do without hope...at least we may yet be avenged. Let us gird ourselves and weep no more. Come! We have a long road, and much to do."

Sad but true.
Toward the end of The Return of the King, the hobbit Sam Gamgee, lost in the tunnels of the dark realm of Mordor after apparently losing his friend Frodo, has a similar moment:

But even as hope died in Sam, or seem to die, it was turned to a new strength. Sam's plain hobbit-face grew stern, almost grim, as the will hardened in him, and he felt through all his limbs a thrill, as if he was turning into some creature of stone and steel that neither despair nor weariness nor endless barren miles could subdue.

There is a strength in resolve without and beyond hope. And we're probably going to need it.
ONE YEAR AGO TODAY, the disaster at Massey Energy's Upper Big Branch mine killed 29 miners. Here's a look back at some painful memories and unanticipated changes. FOR THEIR NEXT STUNT, House Republicans want to kill Medicare. More here.
THE 1 PERCENT (NON) SOLUTION. Nobel Prize-winning economist Joseph Stiglitz looks at America's problem with extreme inequality.
FIGHTING BACK. Unions and allies rallied in all 50 states to support workers rights on the anniversary of the assassination of Dr. Martin Luther King Jr. We had a pretty decent one in WV. REALITY MINING? Here's a look at the new series "Coal."
GOAT ROPE ADVISORY LEVEL: ELEVATED
by El Cabrero 1 comment: 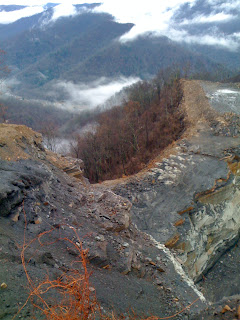 I'm blogging lately about the social realism of Tolkien's Lord of the Rings and how it might apply to working for social justice.
As I've mentioned before, I reread the trilogy recently and made some notes. Here's a line that showed up about 259 pages into it, referring to the Dark Lord:

"...we see that Sauron can torture and destroy the very hills."

Good thing stuff like that doesn't happen in real life, huh?
ALMOST A YEAR after Massey Energy's Upper Big Branch mine disaster, a new lawsuit alleges that some miners survived the initial explosion. And Ken Ward of Coal Tattoo asks a good question: will corporate officials be held responsible?