The Nobel Prize for literature often goes to people I've never heard of, but that didn't happen this time around. Peruvian author Mario Vargas Llosa is very well known and as prolific as he is sometimes controversial.

I'm leaving political controversies aside to say that he is the author of what is probably the funniest book I've ever read, Aunt Julia and the Scriptwriter. My ribs literally hurt from laughter while I was reading it.

The plot involves a young man's love affair with an older woman. He works at a radio station that produces novelas or what we would call soap operas written by a man whose stories hilariously spin out of control.

I'd recommend the book to just about anybody, with the possible exception of Argentines (the scriptwriter slammed them at every opportunity).
by El Cabrero No comments: 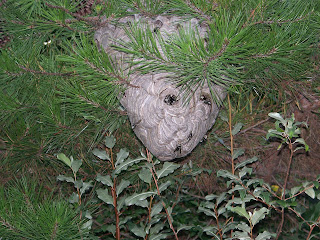 I used to ponder such deep questions as how long it would take a typical American to notice it if birds disappeared. This year I've really started to notice the disappearance of honey bees. I saw exactly zero at Goat Rope Farm this summer.

When I was a little kid I hated honey bees for their tendency to sting me when I accidentally stepped on them barefoot. It didn't take too long to outgrow that childhood prejudice once I learned about how useful, interesting and generally easy to get along with they were.

Honey bees have been called "angels of agriculture" for their role in pollination. Although they have seemed like a natural part of the landscape for centuries, they are not native to North America but were brought here by European settlers in the 17th century. In their absence in the wake of the bee colony collapse of the last few years, I've noticed what seem to be a lot more bumble bees.

This could be a coincidence, but I also noticed a lot more bald faced hornet's nests this year. From what I understand, they mostly eat other insects but I have read that they do some minor pollination in late summer. Given the choice, I think I'd prefer honey bees. I will watch anxiously for their return the same way I do for the return of minnows in our creek after a dry spell.

GETTING HICKY WITH IT. A television ad for Republican Senate candidate John Raese stirred up quite a bit of controversy yesterday after a casting call was released which said that actors should go for the "hicky" look.

A DISASTER WAITING TO HAPPEN. Several serious safety violations were found at a Massey mine in Boone County.

GO UNION. A new study suggests that labor unions improve the quality of life for members and non members.

CAN I HAVE ONE? According to the NY Times,

The earliest known relatives of dinosaurs were the size of a house cat, walked on four legs and left footprints in the quarries in Poland.

SINCE WE'RE ON THE SUBJECT, here's an item about some desert lizards with mammal-like social behavior. 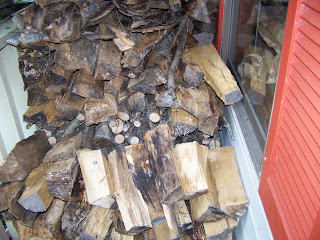 We hit a seasonal milestone at Goat Rope Farm this week with the first lighting of the wood stove. As hot as this summer and fall have been, it didn't seem like that day would come.

This year, I am deriving particular gratification from throwing wood in the fire. Usually, our woodpile is collected here and there on a casual basis, but last year it got personal when some trees of ours fell on a neighbor's yard.

I have engaged in single combat with those suckers since the Christmas holidays, chainsawing, hand sawing, lifting, loading, splitting and generally making little ones out of big ones. Those trees had some really knotty parts and were hell to split. I'm pretty sure that I expended more energy on the chopping some of them than they will yield in the burning.

It is probably not an admirable personal trait to hold grudges against no-longer-animate objects, but I derive satisfaction from singling out the toughest pieces and tossing them in the stove with a farewell greeting along the order of "I've got you now, you ___________."

AIN'T WE GOT FUN. The Rev. Jim Lewis goes Gatsby in his latest edition of Notes from Under the Fig Tree. (As I mentioned before, we have a few fig trees here and it would be hard for a cat to get under them--I don't see how he does it.)

GETTING ATTENTION. The weird race to fill the late Senator Byrd's seat caught the attention of the New York Times.

UNSAFE. This Washington Post article from earlier this week looks at mine safety--or the lack of it.

WORKING ON A MYSTERY. New clues have emerged in the great honeybee die-off.

We are not amused 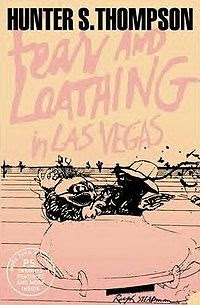 A while back I listened to an interesting series of lectures from The Modern Scholar series on literary journalism, or what used to be called "the new journalism." Some of the names associated with it are people like Hunter S. Thompson, Tom Wolfe, Gay Talese et al.

I decided to give Thompson's famous Fear and Loathing in Las Vegas: A Savage Journey to the Heart of the American Dream a try. It was interesting in the same way that one has trouble not looking at a car wreck, only much creepier.

It mostly consisted of two grown men acting worse than nightmare teenagers, doing such charming things as operating motor vehicles on public roads while under the influence of every imaginable drug, trashing things, and terrorizing waitresses and hotel maids.

I don't get it. Maybe I missed something. But if one of the themes of the book involves wondering what became of the American dream, maybe narcissistic and self indulgent behavior like that had something to do with it.

SIDELINED. Here's a look at long term unemployment in the wake of the Great Recession.

ONE TO WATCH, METAPHORICALLY SPEAKING. NPR is beginning a new series this week on the state of the American middle class.

MORE JOBS, LESS WAR is an approach to the economy recommended here.

ANNALS OF COMPASSION. It looks like Neanderthals had it before we did. 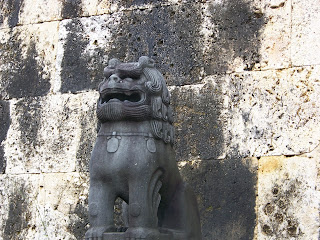 Looking at a calendar and counting with my fingers, I noticed that six months have passed since I traveled to Okinawa to study real karate in the land of its birth. This was something I'd dreamed of doing for longer than quite a few people have been on the planet.

The trip did not disappoint. It was truly a peak experience to study with some of the greatest living masters of dento or traditional karate. The trip was organized as a seminar, so we had the opportunity to practice with a real range of teachers. We were taught by masters of several styles and traditions, including more than one version of the Uechi-Ryu, Goju-Ryu and Shorin-Ryu styles.

Karate has become very distorted as it spread around the world. In the US, it has degraded to the point of a sport engaged in by people obsessed with getting the next promotion or collecting more plastic. I learned in the last year, though, that the process of mutation began before those post-World War II years when Americans were first exposed to it--it started when karate was introduced to the main Japanese islands in the late teens and early twenties of the 20th century.

When the Okinawan karate master Gichin Funakoshi, someone I have long admired, began to teach in Japan, he began to change the art to fit the new environment. Traditional katas were renamed and changed; traditional training practices and advanced techniques were de-emphasized and gradually dropped. He taught quite a bit in university settings, which had highly competitive cultures. Worse, he attempted to "Japanize" karate at a time when Japanese nationalism, fascism and imperialism were at their height.

Ironically, what many people think of as the culture of karate, as in a highly regimented militaristic regimen, is really more the culture of 1930s Japanese fascism than that of the real Okinawan art. The resulting art was highly athletic, but very different from the original. Most Okinawan masters are too polite to say it, but they think that most of what passes for karate today is suitable only for children.

It was great to see, and finally to start to practice, the real thing.

THE COST OF WAR. The Washington Post has an interactive feature on the kinds of traumatic brain injuries often suffered by US military personnel in Iraq and Afghanistan.

GOING (FATIGUE) GREEN. The US military is moving towards renewable energy in an effort to reduce its dependence on fossil fuels. (Suggestion: fewer wars might help.)

UNLAMENTED. The TARP aka Wall Street bailout program expired yesterday. It turned out not to be as costly in the end as people, including me, thought, and it may have really helped prevent a financial collapse, but that doesn't seem to have won it any love.

SLEAZY MONEY. Here's a look at the big money from shadowy groups that is being pumped into the 2010 elections. 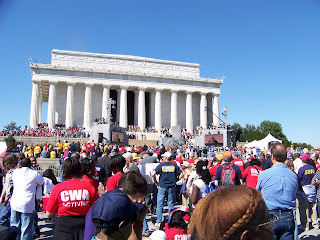 I'm still in the process of unkinking my back and neck--not to mention catching up with sleep, but I'm glad I attended the One Nation Working Together march and rally in Washington this weekend. 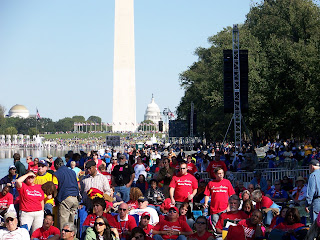 There were all kinds of people there, which was nice. If there was an overall theme, aside from the obvious one of gearing up to keep fighting for social justice, it had to be "Hope not hate." 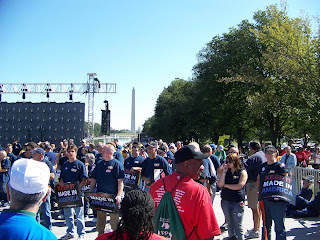 I didn't hear many of the speeches as I decided to act like a dutiful worker for once and help staff an information table for the American Friends Service Committee way out of earshot. 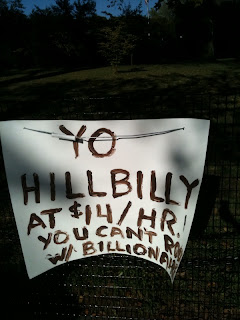 There were all kinds of signs there, but this one was the strangest. I found it in a out of the way place after the rally was over. In case you have trouble reading it, it says, "Yo Hillbilly At $14 an hour you can't run with billionaires."

I kind of wonder if this is some kind of oracular statement directed at me, such as once came from the priestesses of Apollo at Delphi...Probably not, since the likelihood of me having the opportunity or desire to run with billionaires is very small.

NO SURPRISE DEPARTMENT. The gap between those with more and those with less continues to grow.

THINGS PEOPLE IN THE FUTURE WILL HATE US FOR. Here's the beginning of a list.