My summer of Shelby 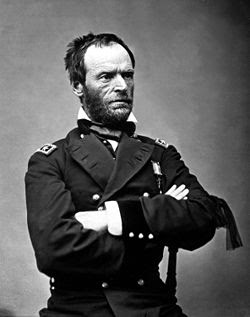 The summer of 2011 officially ended last week and the weather is starting to act like it, for now anyway. I'll remember this season for several reasons, some pleasant, some not. The trip to Italy was cool; the constant knee pain not so much.

But aside from all that, I will remember this as my summer of Shelby. It was during this season that I listened to an unabridged recording of all three volumes of Shelby Foote's masterful Civil War trilogy.

I'm talking over 110 CDs of around an hour and 15 minutes each. If I did the math right, that comes out to 135+ hours. That's a lot of Shelby. He took up my time doing chores, driving, walking the dogs, mowing the lawn, etc.

I have mentioned before how I worship him and have been known to channel him from time to time. I love his long, rambling sentences and sharp wit. I only wish the version I listened to was read by the author. But then I'd listen to a recording of the real Shelby reading the phone book.

When you spend that much time with an author you notice things. I noticed that Shelby had a real issue with William Tecumseh Sherman, which is perhaps not so surprising from a true son of the south.

I wish I had a dollar for every time he referred to Sherman as a "red headed Ohioan." He seemed to be unable to refer to Sherman, who is bound to show up a lot in a book on the subject, without mentioned his hair color.

It made me wonder whether the divine Shelby had a thing about redheads too.

NEED A DOSE OF POLITICAL AND ECONOMIC SANITY? Click here.

THE AMERICAN LEFT and its impact on America is discussed here.

YOUR TALKING ANIMAL FIX is here.

A patron saint with whom not to mess 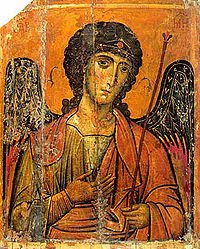 Today, Sept. 29, in addition to being Rosh Hashanah, is the feast day of St. Michael and All Angels. I have always had a love for Michael, whatever he may or may not be. I think of the mighty archangel as the patron saint of all those who have ever opened a can of whoopass in a righteous cause.

Here's a passage from the Book of Revelation that is often read in churches on this day:

And prevailed not; neither was their place found any more in heaven.

And the great dragon was cast out, that old serpent, called the Devil, and Satan, which deceiveth the whole world: he was cast out into the earth, and his angels were cast out with him.

And I heard a loud voice saying in heaven, Now is come salvation, and strength, and the kingdom of our God, and the power of his Christ: for the accuser of our brethren is cast down, which accused them before our God day and night.

And they overcame him by the blood of the Lamb, and by the word of their testimony; and they loved not their lives unto the death.

Therefore rejoice, ye heavens, and ye that dwell in them. Woe to the inhabiters of the earth and of the sea! for the devil is come down unto you, having great wrath, because he knoweth that he hath but a short time.

The way things are these days, I kind of wish I had Michael on speed dial.

UNEMPLOYMENT. It's not just for blue collar workers anymore.

HEALTH CARE REFORM. This could get interesting.

Jesus and goats, or a caprine crime wave 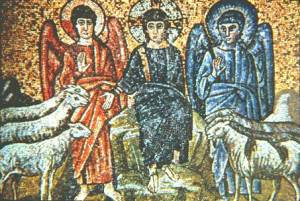 I have long noticed that Jesus, or at least the author(s) of the Gospel of Matthew, didn't seem to like goats much. In chapter 25 of that gospel, it is said that the apocalyptic Son of Man will come and

he will separate people one from another as a shepherd separates the sheep from the goats. And he will place the sheep on his right, but the goats on the left.

The guys on the left are gonna get it.

Since we got goats, I've had a few problems with that verse. I mean, goats can't help not being sheep, whereas people presumably have some type of choice about whether they will behave decently. Amongst my many heretical musings I also began to wonder whether the Second Person of the Holy Trinity harbored a prejudice against goats...or did he just have better information? 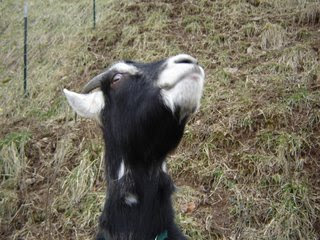 A caprine crime wave that hit Goat Rope Farm last night helped to answer that question. It seems that Cornelius Agrippa (above) decided to batter his way into the part of the barn where grain and hay are stored.... 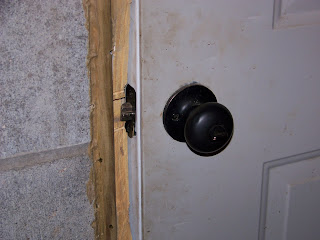 ...busting up a door in the meantime. He was then joined by several accomplices and they had a good time knocking over storage cans, chowing down, relieving themselves on fresh hay and generally trashing the place.

COAL GOING UNDER? Some analysts predict a steep decline in the WV coal industry over the next few years.

On the road again

Last weekend marked a welcome milestone. A bit shy of four weeks after having arthroscopic knee surgery I ran, sort of, my first post-op 5K. I was really slow but it was nice to be in motion again.

Jogging had been out of the question this summer due to persistent knee pain. Other favorite activities had to stop too, like jumping rope, kicking a bag and sparring. Karate became pretty much impossible towards the end. I tried to make do on a bike but it just wasn't the same.

One thing that made the run more special was the fact that I completed it with my 7 year old grandson, who ran every step of the way. In fact, the little bugger finished ahead of me.

I think I can still take him in karate though.

YOU PROBABLY ALREADY KNEW THIS, but the price of health insurance is going through the roof.

THE MORAL ARC THING. As far as I can tell, the moral arc of the universe swings around randomly (in fact, "moral universe" seems like an oxymoron, but here is an interesting alternative perspective. 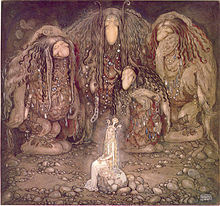 I understand that it is the custom in Zen Buddhist monasteries to collect any remaining grains of rice after a meal and offer them to the hungry ghosts. Hungry ghosts in the Buddhist conception of the wheel of life and death are those beings who were greedy in previous lives.

In that unpleasant state or realm, one has a huge and empty belly that is always hungry but a tiny throat that can't swallow much. Feeding them is a meritorious act of generosity.

I've come to think of writing op-eds, like this one of mine, as a similar act since putting one in the paper feeds the trolls, which in this case refers to right wingers who lurk around the web in order to attach their remarks to pieces they disagree with like lampreys latching on to fish.

I devoutly hope that this act of providing nourishment will serve me well in my next rebirth.

THE DEATH PENALTY. E.J. Dionne argues that only conservatives can end it.

CHIMPANZEES are just not that into cooperation.