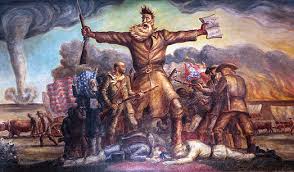 Today I managed to shuffle across the finish like of the Freedom's Run marathon that ran through Harpers Ferry and the Antietam battlefield after what seemed to be about a week. At the beginning of the race I was almost overcome with emotion thinking about all that happened here.

This was my second time, so I knew what was coming. Mentally, I divided the race into four parts: the start, the grind, the suck and the death march.

The start is about five miles around Harpers Ferry, much of which was downhill. The grind is 10 miles along the Potomac towpath trail, which is mostly flat. The suck is about five miles of nasty hills leading to and through the Antietam battlefield. The death march is the final six mile stretch.

Marathoners often talk about hitting the wall around mile 20, when the body runs out of readily available fuel. One advantage of having a bad heart was that I didn't really hit it then. One disadvantage is that it was all wall all the time.

One such sign today really hit home: "Embrace the suck."

For the record, I'm generally opposed to misery, but when misery time rolls around, as it will, and when there's no way out for a while, embracing the suck is pretty good advice.
by El Cabrero No comments:

The latest Front Porch podcast is out. This time the focus is on WV's tanking economy and budget and what we might be able to do about it. I'm not as pessimistic as some people. Maybe that's because I've been to Gaza...
by El Cabrero No comments:

Really worth a look

There was a great op-ed in the Gazette today about the danger of drinking Arthur Laffer's tax-cuts-for-the-rich-Kool-Aid. After all, it worked so well in Kansas, right?
by El Cabrero No comments:

It looks like the state budget is tanking, due in part to declining severance tax revenues. In addition to the usual services and things like higher ed, this time K-12 education is up for cuts as well.

(I hate to say I told you so, but remember those millions in corporate tax cuts that were supposed to cut jobs but didn't?)

Meanwhile. the Republican-led tax reform select committee is pondering a suggestion to shift more taxes from businesses to families and homeowners.

WV in the news

It's been kind of a big news day for West Virginia. Here's my pick of what 's interesting:

FIRST, on the Don Blankenship trial, here's the latest.

SECOND, on the Republican-led effort to drive down wages in WV, read more here.

THIRD, for a look at images from the coalfields, click here.

FOURTH, for an interesting view from the Washington Post on the WV political climate, click here.
by El Cabrero No comments: