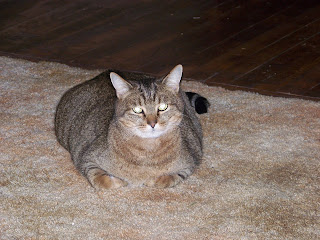 Seamus McGoogle spends most of his time in a state of mushin.

Welcome to Cool Japanese Words Week at Goat Rope. Each day looks at a word or concept from the martial arts and/or Zen tradition that may be of interest to people who want to make the world less nasty. You'll also find news and links about current events.

As I mentioned Monday, most of the words have to do with paying attention. Kamae, the subject of Tuesday's post is all about readiness before taking action. Zanshin, see yesterday's post, was about the state of mind on completing an action.

Today's word is mushin, with the mu being like a cow sounds and the shin being what it looks like.

Here's a paradox. Mushin represents the highest mental state, but it literally means "no-mindedness." Far from being stupid, it means responding spontaneously and appropriately to a situation without having to stop and think about it.

As esoteric as it sounds, most of us have probably had this experience at some point. A good basketball player probably doesn't have to think about a lay up--he or she just does it.

In the martial arts, sometimes if you're lucky you do something without thought and then think "that was cool." As the late great Bruce Lee put it,

...when an opportunity occurs, I don't hit. It hits all by itself.

In the context of Japanese swordsmanship, the Zen master Takuan wrote of that state:

The mind must always be in the state of 'flowing,' for when it stops anywhere that means the flow is interrupted and it is this interruption that is injurious to the well-being of the mind. In the case of the swordsman, it means death. When the swordsman stands against his opponent, he is not to think of the opponent, nor of himself, nor of his enemy's sword movements. He just stands there with his sword which, forgetful of all technique, is ready only to follow the dictates of the subconscious. The man has effaced himself as the wielder of the sword. When he strikes, it is not the man but the sword in the hand of the man's subconscious that strikes.

The use of the term flow by Takuan fits in well with modern psychology. The researcher Mihaly Csikszentmihalyi wrote an excellent book some years back titled Flow: The Psychology of Optimal Experience about just that kind of thing.

People in a state of flow, which can be experienced in lots of ways, are so absorbed in what they're doing that they may lack self-consciousness altogether. I think the slang term being "in the zone" refers to the same kind of thing.

Here's another paradox, in martial arts and other traditional disciplines, the way to get to mushin is through drill, drill, drill. You train so you don't have to think.

People who want to work to make the world a better place can approach mushin by getting so competent at pulling things together that you can do it without having to start from scratch every time. That may involve good alliances, media and communications competency, an understanding of strategy, and ready access to good information.

Mushin is a nice place to be, although you usually only become aware of it after it happens.

STIMULUS DEAL. The House and Senate conference committee reached a tentative deal on a scaled-back recovery package which many economists believe is too small to jolt the economy. It now goes back to each house.

CONTRACTING OUT federal jobs to the private sector leaves one out of five such workers in poverty, according to the latest Economic Policy Institute snapshot.

ONE TO WATCH. The US Supreme Court is set to hear arguments March 3 in a case that will determine the propriety of WV Justice Brent Benjamin hearing cases regarding Massey Energy. Benjamin, a political unknown, was elected in 2004 with the help of millions of dollars from Massey CEO Don Blankenship.

your wonderful blog this week, couldn't have come at a better time for me

it transports me from my diurnal cares and lifts me

bless and keep you