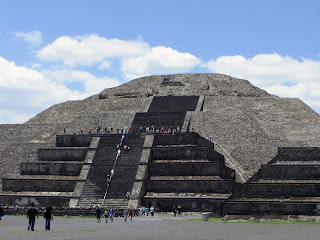 This pyramid at Teotihuacan has some fudoshin going on. It would be kind of hard to turn it over.

Today is the final day of Cool Japanese Words Week at Goat Rope. Each day has looked at a word or concept from the martial arts and/or Zen tradition that may be of interest to people who want to make the world less nasty. You'll also find news and links about current events.

As you might expect by now, the idea needs some unpacking. It does not mean dogmatism, rigid thinking or fixed ideas. Instead it implies a rooted mental state or level of determination as well as equanimity. Fudoshin in that sense is a necessity for anyone committed to working to improve things over the long haul.

In karate there is a posture called fudo dachi or immovable stance. It looks like a cross between a horse stance and a forward stance and has a low center of gravity. Things and/or people with high centers of gravity are easy to trip, throw or turn over.

Think of the song "We Shall Not be Moved."

I had a fudoshin moment a few years ago when I got summoned to the office of a high state official who was upset about things I'd written in newspaper columns about the shabby way poor people had been treated at the time. I'm not sure what the intent was, other than to "get my mind right" a la Cool Hand Luke. When I got the call, I agreed to go and was very polite, but all the while I was thinking, "Fudoshin, dudes. Deal with it."

In looking around to see what others have written about fudoshin, I found a pretty good summary in wikipedia. I'm not sure whether it's a quotation from another source or one written for the entry, but it works for me:

A spirit of unshakable calm and determination,
courage without recklessness,
rooted stability in both mental and physical realms.
Like a willow tree,
powerful roots deep in the ground
and a soft, yielding resistance against
the winds that blow through it.

WHAT PASSED. Here are some key ingredients of the economic recovery package agreed to by the conference committee. A vote in the House is likely today, with the Senate to follow possibly this weekend. While the bill isn't perfect, as Paul Krugman points out here, there are lots of good things in there and some bad things are taken out.

Some wheeling and dealing continued after the agreement had been reached. Final votes in both houses may occur today.

THE SHOCKING TRUTH. Here's an account of a revisitation of Milgram's famous experiment on obedience to authority.

TO SLEEP, PERCHANCE TO REMEMBER. Science finds a strong link between sleep and memory.