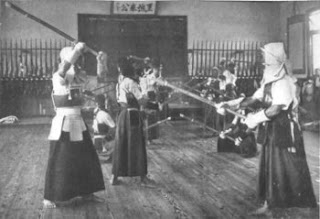 Welcome to Cool Japanese Words Week at Goat Rope. Each day will include a discussion of a useful but hard to translate concept from the Japanese martial art and Zen tradition, which are kind of intertwined. It is El Cabrero's belief that some of these ideas can be helpful in making the world less violent and more just.

Today's word is kamae, which is sometimes translated as stance, posture or ready position, although there's a lot more to it. In a deeper sense, it refers to a state of calm alertness before action. It doesn't imply a fixed position or attitude or a pre-conceived rigid plan but rather a focused awareness prepared to respond to the moment.

C. W. Nicol, a British martial artist who studied karate in Japan in the early 1960s came close to it with these words describing the katas or forms of advanced students:

In perfect stillness, they exuded strength. I saw it, and I thought of herons, poised above a pool, ready to spear a fish; of high-soaring falcons ready to stoop; of a cat, sitting patiently by a mouse hole...

My own favorite description of it comes from Erich Fromm's discussion of hope:

It is neither passive waiting nor is it unrealistic forcing of circumstances that cannot occur. It is like the crouched tiger, which will jump only when the moment for jumping has come...

Without good kamae, one can miss opportunities for action (and in some cases, get clobbered in the bargain). As Hamlet said, "the readiness is all."

RECOVERING THE RECOVERY? The economic recovery bill cleared a major hurdle in the Senate yesterday, with a final vote expected for today. After that, the bill goes to conference where differences between the House and Senate versions will be reconciled.

The Senate version weakened some key provisions of the House bill that would affect those hardest hit by the recession. For more details of the differences, click here. Some of these defects may be improved in the final version, but that will depend in part on how much noise people make.

The American Friends Service Committee is still making a toll-free number to the Capitol switchboard available for those who want to support the bill. AFSC recommends a passage without delay and without reducing aid to families and states. It also opposes the flawed “E-Verify” measure and the $1 billion for the National Nuclear Security Administration. The number is 1-800-473-6711.

THE S WORD is discussed here.

A NOD TO CHUCKIE D. Darwin, that is.

NOTE. It's been a long day on the road, so I'm scheduling this post to be published a few hours from this writing. Here's hoping nothing really bad happens between now and then.