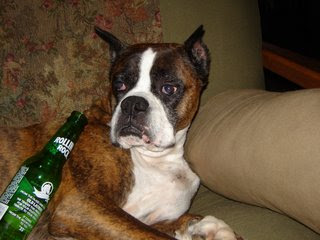 What would the holiday season be without favorite reruns? In that spirit, Goat Rope is pleased to once again feature a 2006 contribution by boxer and official Goat Rope Farm film critic Sandor Sege (pronounced Shandor Shegg-AY).

Once again, we must remind our readers that Mr. Sege sustained a head injury whilst crashing into a wall chasing a squeaky toy. As a result, he sometimes transposes the plots of the films he discusses. (His fondness for holiday libations is doesn't help). Nevertheless, we are convinced that his insights into the world of cinema more than compensate for this regrettable shortcoming.

It is our hope that these weekend features will help to elevate the level of public discourse and promote a greater appreciation of both the humanities and the animalities.

THE CANINE FILM CRITIC EXPLAINS "IT'S A WONDERFUL LIFE"

OK, so this is like everybody's all time favorite Christmas movie. It's about this Jimmy Stewart guy, except he's pretending to be someone else. That's acting, which sometimes happens in movies.

After he loses a bunch of money and thinks he messed up his whole life, he thinks about killing himself. But just before he throws himself into the river, this big twister comes and picks up his house and drops it on a witch. Only her feet are sticking out. And these little people are real happy about it.

Glenda the Good Witch tells Jimmy/the other guy that he needs to go see the Wizard to figure it all out with this angel named Toto who wants to get his wings.

Toto kind of looks like a squeaky toy to me.

So anyway he takes off on the Yellow Brick Road and is joined by some hobbits, an elf and a dwarf. They have to fight off a lot of orcs and trolls, which is kind of cool.

Moomus and Doodus say I look like a cave troll...

So anyway, they finally get to the wizard and destroy the ring. And when the bell rings, Jimmy gets his wings and goes back to Kansas.

And here's the thing: he could have got there all along.

They say if you play Pink Floyd's The Wall while watching this movie you get real confused and depressed.

I think that's only true if you run out of popcorn.