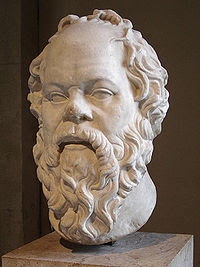 Yesterday's post was about a description of poverty developed by the writer Earl Shorris. He called it a "surround of force," which keeps poor people on the defensive, dealing with one crisis after another with little or no opportunity to reflect.

That's pretty much what it was like for me.

Shorris also developed a novel approach to dealing with the problem that seemed to work for many of the people who had the chance to try it. It involved, of all things, studying the humanities and reading and talking about the classics. As he put it,

The humanities are a foundation for getting along in the world, for thinking, for learning to reflect on the world instead of just reacting to whatever force is turned against you. I think the humanities are one of the ways to become political...

Shorris makes his case in two books, New American Blues: A Journey Through Poverty to Democracy and Riches for the Poor: The Clemente Course in the Humanities.

No doubt there are politically (self) righteous advocates for the poor who have never been there who think this was a silly or useless approach. I will waste no words refuting them except to say that when one is in a miserable situation, there is really nothing so rare and welcome as the chance to think and reflect. Oh yeah, and this: nothing is too good for the working class, bub.

It's no substitute for other ways of fighting poverty but I think it has merits.

Shorris developed what came to be the Bard College Clemente Course in the Humanities. According to their website, the program

grew out of the disturbing fact that in our society many low-income residents have limited access to college education and no opportunity to study the humanities. The Clemente Course provides college level instruction in the humanities, with the award of college credits, to economically and educationally disadvantaged individuals at no cost and in an accessible and welcoming community setting. Participants study four disciplines: literature, art history, moral philosophy, and American history. Like their more affluent contemporaries, students explore great works of fiction, poetry, drama, painting, sculpture, architecture, and philosophy, while learning also about the events and ideals that define America as a nation. The course also offers instruction in writing and critical thinking, while the seminar style of the classes and dialectical investigation encourage an appreciation for reasoned dialogue.

One person who went through the program described its effects:

This class has given me something that I thought was lost forever, and that is the will power to reach my dreams.

I never had the chance to participate in or observe the course, but I found my own way toward that conclusion by both living in and working with people who live in poverty. More on that tomorrow.

DEFICITS, DEFICITS, WE GOT DEFICITS. Here's Nobel Prize-winning economist Joseph Stiglitz on some of them.

OWN TO RENT. Here's some interesting news on the housing crisis.

SEE YOU IN COURT. Mountain State Justice, a public interest law firm, plans to sue the WV Medicaid program over changes to the plan which may limit services to children.

THE COMET MAY HAVE BEEN FRAMED. Some scientists are now blaming volcanic eruptions for the extinction of dinosaurs.