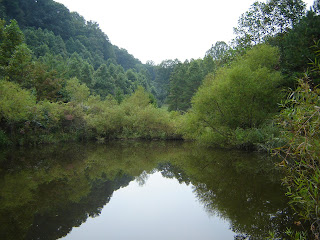 Note to email subscribers: I hit the wrong button and accidentally published an earlier draft that may have wound up in your mailbox. My bad!

Several years ago, a friend loaned me a copy of James Webb's Born Fighting: How the Scots-Irish Shaped America. El Cabrero is himself a member of that bellicose tribe, as are many of my fellow Appalachians.

(This was before Webb launched his political career and I remember thinking at the time that I kind of liked this guy--too bad he was a Reaganite. That issue has since been resolved.)

While I am normally averse to ethnic generalizations, our people do have a pretty long and deep combative heritage. After all, the Roman emperor Hadrian built his wall to keep our kind out--and I can't say I blame him all that much.

Looking back at my own family, it seems like I had ancestors in every major American war going back to the Revolution (generally although not always on the side of the United States). They probably invented some of their own as well.

When I came of age, I felt the tug of that tradition. The main reason I didn't enlist was that this was the beginning of the Reagan era and I didn't think that killing poor Latin American workers and farmers in the interests of the wealthy--a realistic possibility at the time--was just or legitimate.

I had to get my hillbilly ya yas out in a different way. But they didn't go away.

More along this line to come...

SIGNS OF THE TIMES. It's no surprise that bankruptcies are on the way up.

THEN AND NOW. Here's a look at the Great Depression and some lessons from it that could apply now.

THIS COULD GET INTERESTING. From the Charleston Gazette:

The U.S. Supreme Court decided Friday to hear an appeal of whether West Virginia Supreme Court Justice Brent Benjamin should have stepped aside in a case involving Massey Energy, after Massey's chief executive spent millions of dollars to unseat Benjamin's opponent in the 2004 election.

As sheer random chance would have it, Benjamin tends to rule in Massey's favor. In an editorial last week, the NY Times had this to say about tainted justice. Here's hoping the court ends this disgraceful fiasco.

MEANWHILE BACK AT THE RANCH, here's the latest on the lawsuit filed by the widows of the 2006 Massey Aracoma mine fire.