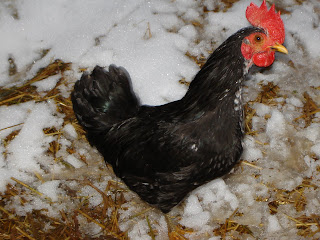 Roosters are not generally known for their conflict resolution skills.

Lately, Goat Rope has been exploring the cultural influences that shape how different people tend to think about violence and fighting.

My own family has deep roots in the gizzard of Appalachia. This is a nice place, but some of us around here descend from long lines of...shall we say...spirited Scotch-Irish people and even more spirited Celts. Some of the really crazy ones were on my father's side.

Those people were interesting, fun and colorful characters. They could be extremely generous and very gracious hosts and could really turn a phrase (provided you didn't mind some artful profanity). But many of them had what we might call a liberal attitude about scrapping when provoked.

There was even a saying in one branch of my family that people would say when someone displayed a lack of courage or spirit: "Where's your fightin' Gillespie?"

I wonder about the force of tradition and heredity. I am generally speaking a peaceful person. My day job consists of working for the American Friends Service Committee, a Quaker organization tolerant enough to hire me and even let me do this blog. I've spent a lot of time working on various ways of non-violently resolving conflict.

However, I've spent decades studying and practicing the fighting arts and would do it all the time if I could get away with it, bad knees and all. I love a good tussle, although generally of the non-physical variety.

My daughter (La Cabrita), a Ph. D. student in psychology, observed that I seemed prouder of her when she recently defeated a more advanced opponent at a karate tournament than for anything else she'd done. What can I say?--her kicks were awesome! My son (El Cabrito) could relate similar stories.

When they were little kids, La Cabrita out of the blue kicked El Cabrito across the room with a picture perfect side thrust kick. I am embarrassed to say that the first words that escaped my lips were "Good kick!"

That was something my great grandfather might have said...

Anyhow, I've recently read some interesting social science research on that might explain how some cultures (such as my own) got to be that way. As I've frequently argued, those who want to make the world less violent would do well to understand the things that contribute to violence. About which more tomorrow.

DADDY, WHAT'S A TRAIN? was a Utah Phillips song my kids enjoyed when they were little (and weren't kicking each other). On that note, here is an interesting take on the auto bailout currently being discussed and a call for investments in mass transit.

ARACOMA. Widows of two men killed in the Massey Energy mine fire in 2006 settled their suit yesterday.