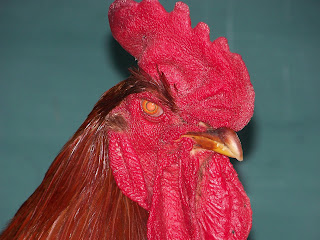 Stewpot Rooster was always ready to defend his honor.

Lately Goat Rope is looking at how cultural factors can shape people's attitudes towards violence. As noted previously, in societies where the good things of life are scarce and easily stolen, people often develop attitudes that support the use or threat of violence to defend goods, status and respect.

Social scientists refer to such societies as "cultures of honor," but that term may require a little unpacking. The term honor, after all, has many meanings. In this case, we are not referring to honor in terms of moral rectitude or virtue such as Samuel Johnson did in his dictionary. Johnson defined honor as "nobility of soul, magnanimity, and a scorn of meanness."

Instead, as Richard Nisbett and Dov Cohen argue in Culture of Honor: The Psychology of Violence in the South, the term refers to societies in which

The individual is prepared to protect his reputation--for probity or strength or both--by resort to violence. Such cultures seem to be particularly likely to develop where (1) the individual is at economic risk from his fellows and (2) the state is weak or nonexistent and thus cannot prevent or punish theft of property.

Think Wild West, prisons, rough city neighborhoods or schools, isolated but dangerous rural areas, herding societies, etc. Cultures (and subcultures) of honor have developed in many parts of the world where similar conditions prevail. And once a culture acquires certain traits, they can often endure long after the conditions that engendered them have changed.

ON A RELATED NOTE, here's a article about the influence of war on human evolution.

WHAT HE SAID. Here's Gazette columnist and economics professor John David writing in support of the Employee Free Choice Act.

HUNGRY PLANET. From the New Yorker, this is an interesting take on the global food crisis that takes a swipe or two at market fundamentalism.

FAILED CHARM OFFENSIVE. Here's what Massey Energy CEO Don Blankenship had to say about the recent settlement of a lawsuit by the widows of the Aracoma mine fire.

WOOLY MAMMOTHS, ANYONE? Scientists are talking seriously about cooking one up.