A voice from the beyond 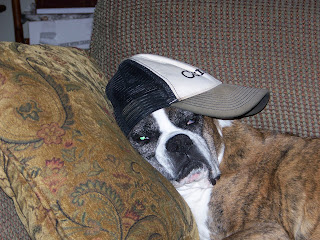 For first time visitors to this blog, it is our policy to write about fairly serious human issues during the week. On the weekends, however, anything goes.

This weekend, we are pleased to feature a review by one of our many animal contributors, the late Mr. Sandor Sege (pronounced Shandor SHEGG-ay). Mr. Sege was, until his untimely demise this winter, the official canine film critic of Goat Rope Farm.

While going through various papers connected with his estate, we discovered one of his very last works, a review of the film Mama Mia. It is our pleasure to offer this item to our readers.

Note: while we don't mean to speak disrespectfully of the departed, we must remind the reader that Mr. Sege suffered a head injury when he crashed into a wall whilst chasing a squeaky toy and was known to occasionally transpose the plots of the films he reviewed. Nevertheless, we believe that his unique insights into the world of cinema more than compensated for this regrettable shortcoming.

OK, so this movie is kind of based on the music of some band. I think it was like Bach or Bachman Turner Overdrive or something like that. Or maybe it was Pink Floyd...

Anyway, there's this girl who is about to get married and is sending out invitations. She doesn't know who her dad is but she read her mom's old diary and narrowed it down to three guys.

One of them goes back to Vietnam to bust out the POWs. Another is this monster robot from the future. The third one is fighting off some mummy called Imhotep. But the thing is, all three of them want something from the Wizard. The POW guy wants a brain, the robot wants a heart and the other guy wants some kind of spray to keep mummies away.

When they all get to the wedding, they find out they really had what they wanted all the time. All except the girl, who gets to marry Mr. Darcy instead.

I could see that coming a mile away.