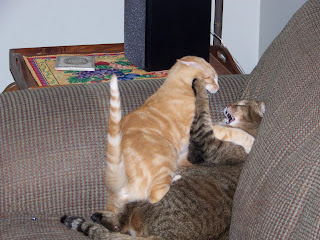 I recently listened to a recorded version of Temple Grandin's book Animals Make Us Human. Hers is an interesting story. Diagnosed with autism as a child, she was able to use her experiences to great advantage as an animal scientist.

In the book, she discussed core emotions for animals (including us). One of these was rage, which some scientists believe to be a response to extreme restraint, such as a situation of being captured and held immobile by a predator. It occurs to me that poverty, which Earl Shorris once described as a "surround of force" is a similar kind of extreme restraint.

As I mentioned in earlier posts this week, this month marks 20 years for me of working on economic justice issues for the American Friends Service Committee. But before all that, I spent several years in involuntary poverty, a situation that can make you feel like a hunted animal.

El Cabrero is a big fan of Simone Weil's essay The Iliad or Poem of Force, where she describes force as that which turns a human being into an object, either literally as a corpse or metaphorically as one who loses freedom. Poverty can do that too. At times it makes you feel more like the object of others or of impersonal forces than an active subject.

And it can produce rage. I felt it then and I still do when I see poor people degraded and abused. The experience seems to have made me a bit edgier. After living that reality, I'm grateful to have had the chance to do something about it when the opportunity arises.

(And, speaking purely as an animal, it is way more fun to hunt than to be hunted.)

All human motivations are complicated and ambiguous, but part of mine, frankly, is payback.

THE ECONOMY AND THE DEFICIT. Here's economist Dean Baker's advice to deficit hawks who are missing the point.

THE BUDGET. The main priorities of President Obama's budget may survive congressional changes. It wouldn't hurt to give your senators and representatives a nudge.

WHITHER CAPITALISM? Will it morph into a kinder, gentler variety in the wake of the global economic crisis?

THIS IS YOUR BRAIN on receiving "expert" financial advice.

I can definitely see rage in that way, and I definitely felt that way when I was poor. And I think further that poor people are a proper minority in this country, if not in WV, and that white middle-class privilege works against us in many of the same ways.

I'm at college, right, and I have this teacher from Seattle. The other day he printed out a paper for several students and didn't ask/tell us about it. When he handed it out in class, he asked for a dollar to recoup the cost of printing. I got so mad at him! My years of poverty have left me kind of racist against old white men because of stuff like this--more than anyone else in our society, they run around flying their privilege like a kite, blissfully ignorant of their complicity in perpetuating destructive attitudes. I'm working on my rage against these guys, but it's hard when I so rarely see them working for similar understanding of my circumstances.

Thanks for posting this. It's given me a lot to think about.

There's a line from a poem by William Blake that goes something like "Pity would be no more/if we did not make somebody poor."

Thanks for the comment--rage on!