Lately it occurs to me 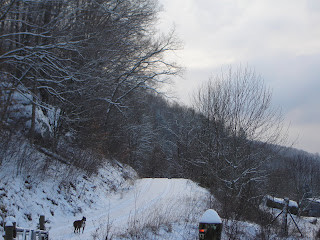 While glancing at a calendar recently, El Cabrero had a sudden realization. It was 20 years ago this month that I started working on economic justice issues for the American Friends Service Committee. Talk about a long strange trip...

There have been a lot of bizarre twists and turns along the way, but the strangest one was that it happened at all.

First of all, it doesn't often happen that one finds the job of one's dreams reading the local want ads from a WV paper--but that's exactly how I heard about it. The want ad was looking for someone with an understanding of Appalachian culture to work on poverty and other economic justice issues.

As it turned out economic justice issues and Appalachia (the two are inescapably entwined) were the main subjects of my not infrequent rants. When I showed it to some people who knew me (some of whom occasionally read this blog), they just laughed.

Still, jobs like that, as rare as they were then (and now), didn't usually go to people like me. For one thing, it has often happened that people from outside the area get hired to work in places like WV--don't even get me started on that one. For another, such rare jobs usually go to people who are well connected.

I was anything but that, having spent most of the 1980s being poor. Those who have never experienced poverty might be surprised to find that living in it is a very time consuming thing. Although I followed current events and read and wrote a lot about issues related to social justice, the only social movement I knew first hand was the constant scramble to make ends meet.

Also, I was and remain basically a small town hick, uncomfortable in cities, even in the small ones that pass for big ones in WV. I didn't know any of the proverbial movers and shakers (although I had a friend who had been watching and keeping score over the years--you know who you are!) and they didn't know me.

But, as the eminent philosopher Tom Petty once noted, "even the losers get lucky sometimes."

CHEW ON THIS. The food revolution is going mainstream. You know something is up when even the karmically challenged city of Huntington, WV is planning community gardens.

SCAVENGING is also alive and well these days.

CEO BLUES. Here's a rant on CEO pay by a friend of mine from Sunday's Gazette-Mail.

Most glad that you responded to that ad. You do awesome work. Hope you can keep it goin' for some good time yet.

Thanks, Martha! It kept me off the streets anyhow (so far.)