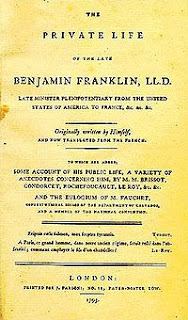 The era of the Enlightenment, sometimes called the Age of Reason, reached its peak in the 18th century. It was characterized by a cooling of homicidal religious zealotry and the growth of science and technology and a growing optimism about human possibilities.

Benjamin Franklin, the theme at Goat Rope lately, was nothing if not a child of the Enlightenment. A constant theme in his Autobiography is the quest for self improvement, which became a kind of American mania.

Franklin took to to a degree that probably seems comical to modern readers, jaded as we are by the terrors of history in the centuries that followed. Can you imagine writing something like this (with sincerity)?

It was about this time I conceiv'd the bold and arduous project of arriving at moral perfection. I wish'd to live without committing any fault at any time; I would conquer all that either natural inclination, custom, or company might lead me into. As I know, or thought I knew, what was right and wrong, I did not see why I might not always do the one and avoid the other.

(Where are Augustine and Calvin on those extremely rare occasions when you actually need them?)

He found it to be no easy rowing:

...I soon found I had undertaken a take of more difficulty than I had imagined. When my care was employ'd in guarding against one fault, I was often surprised by another; habit took the advantage of inattention; inclination was sometimes too strong for reason.

Not being a person to easily admit defeat, he determined to resort to a systematic method, about which more tomorrow.

THE WANING OF THE AGE OF CULTURE WARS? Maybe. Would that it were so.

ALSO WANING, in the wake of the economic crisis, is the well-being of many non-profit organizations. This one hits a little close to home for El Cabrero.

WAXING, the opposite of waning, could happen to labor unions with the passage of the Employee Free Choice Act.

UNEMPLOYMENT INSURANCE. Lawmakers in WV are contemplating changes in funding for this program. El Cabrero and others are also pushing for the state to expand benefits in order to be eligible for more federal stimulus money.

MOUNTAINTOP REMOVAL mining is the subject of this NY Times editorial.

DEPARTMENT OF CORRECTIONS. A book mentioned last week about Darwin and Lincoln, Angels and Ages was written by Adam Golpik, not David. My bad.