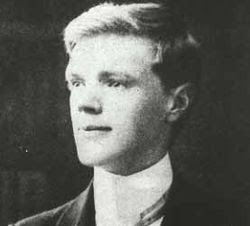 D.H. Lawrence was not a big Franklin fan. Image courtesy of wikipedia.

El Cabrero has been amusing himself, and, he devoutly hopes, the Gentle Reader, lately by thumbing through the pages of Benjamin Franklin's Autobiography. This week I've been looking at his quest for moral perfection.

It's hard not to like Franklin, even when he's taking the whole Protestant Ethic/Spirit of capitalism thing too far. But there are those who manage to dislike him. One such person was the British writer D.H. Lawrence.

When he was able to tear himself away from writing about sex, Lawrence put together an amusing but venomous look at American literature in which he singles "sturdy, snuff-coloured Doctor Franklin" out for singular abuse.

In his discussion of Franklin's list of virtues and his practice of them, Lawrence accused him of attempting to fence in the human soul:

Who knows what will come out of the soul of man? The soul of man is a dark vast forest, with wild life in it. Think of Benjamin fencing it off!

Oh, but Benjamin fenced a little tract that he called the soul of man and proceeded to get it into cultivation. Providence, forsooth! And they think that bit of barbed wire is going to keep us in pound forever? More fools them...

And now I, at least, know why I can't stand Benjamin. He tries to take away my wholeness and my dark forest, my freedom. For how can any man be free, without an illimitable back-ground? And Benjamin tries to shove me into a barbed-wire paddock and make me grow potatoes or Chicagoes.

Rave on, D.H. For all his quirks, old Ben lived a full and generally useful life. I'm not sure it would have been better spent writing highbrow erotica.

VOLUNTEERING AGAIN. Here's an interesting news story about the growing number of veterans of the wars in Iraq and Afghanistan volunteering to help civilians displaced and harmed by the war.

TAKING IT PERSONALLY. Here's an interesting article about how AIG executives who received post-bailout bonuses are feeling the scorn and ire of many people.

EAT IT. Are big changes coming to America's industrial food system? When an organic garden is about to be planted at the White House, anything is possible.

URGENT WHALE GENEALOGY UPDATE. Hippos may be their closest living relative. I was thinking maybe wolverines...