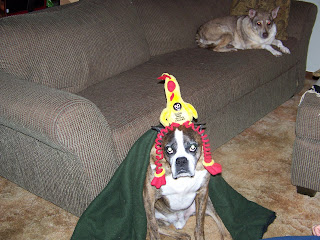 It is with sadness that we relate the passing of a regular contributor to this blog, Mr. Sandor Sege (pronounced Shandor SHEGG-ay), who died of multiple systems failure.

Mr. Sege was the official Goat Rope Farm canine film critic. A rescue dog with multiple medical issues, some of which were compounded by head injuries incurred whilst chasing squeaky toys, Mr. Sege found enjoyment in watching and discussing cinema.

Regular readers of this blog will be glad to know that Mr. Sege has a number of as yet unpublished reviews. At the time of his demise, he had just completed critiques of The Dark Knight and Mama Mia.

We hope you will join us in wishing Mr. Sege a fortunate rebirth in the Pure Land of Amida Buddha, where he will be able to pursue enlightenment under the most favorable circumstances, a process that is likely to be somewhat protracted.

May be it should be a Halloween day ?
posted image looks like that.
Dog Stairs

I'm sorry to hear about Mr. Sege's departure from his earthly confines. His film reviews are classics. He will be missed for sure.

I for one will miss Mr. Sege. May he continue to pour fourth his cogent critiques over the Rainbow Bridge.

So sorry to hear of Mr. Sege's departure. I'm sure his humans will miss him, as will we all.

I'm truly sorry to hear about Mr. Sandor Sege....he brought a lot of pleasure to us all with his great sense of "sometimes a little confused" reviews.

I'm sure the entire "farm family" will remember him for many years to come....

May his future trails be always happy!

Thanks for all the comments and emails about his passing. He will be sorely missed at Goat Rope Farm. The difficulty of his death was only partly matched by that of digging a boxer-sized grave (complete with squeaky toys) in the frozen ground.