Listening to the ants scream 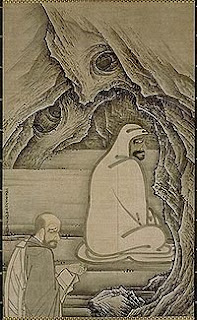 Along with links and comments about current events, the theme at Goat Rope lately is Buddhist lore. The series started last week if you want to go back. While El Cabrero is not a card carrying Buddhist, I've learned a lot from those traditions.

The focus now is on legends surrounding the colorful figure of Bodhidharma or Daruma, who is said to have brought Zen from India to China. As noted in yesterday's post, he is said on arrival to have had a bizarre interview with the Emperor in which it is safe to say he did not make a positive impression.

(That happens to me every time I do a nine year stretch in a lotus position.)

Another legend claims that he ripped off his own eyelids when he found himself dozing during meditation. From these grew the tea leaves that later monks would use to deter sleep.

The story goes that he refused to teach anyone until Hiu-k'o, who would become the Second Zen Patriarch in China, cut off his arm and presented it to him as an offering.

Body parts were presumably expendable back then...

Bodhidharma tersely asked him what he wanted and the student asked the monk to pacify his mind. "Bring it to me and I will pacify it," he said. When Hiu-k'o stammered that he couldn't find it, Bodhidharma replied, "There, I have pacified it for you."

His story ends on an appropriately weird note. One legend has it that he died at the ripe old age of 150 or so and was respectfully buried. Everything seemed normal until a government official reported a cordial meeting with him on a journey to Central Asia. Bodhidharma was reportedly heading back to India carrying a single sandal. When the tale was told, Bodhidharma's tomb was opened.

It contained one sandal...

Those old Zen guys had all the fun.

THOUGHTS ON THE NOUVEAU POOR can be found here.

HEALTH CARE. This report from Families USA highlights the need for WV to expand its Medicaid program to cover more adults.

THE MUSIC OF "PEANUTS." Was there a message in Schroeder's music?

URGENT ANCIENT GIANT BIRD DOO DOO UPDATE. You know you've been waiting for it. Read all about it here.