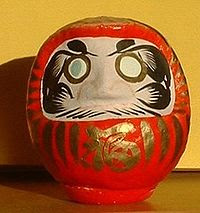 Lately, the theme at Goat Rope has been Buddhist lore, although you will also find links and comments about current events.

For the last week or so, the focus has been on the legendary figure of Bodhidharma or Daruma, the monk who is credited with bringing the Zen tradition from India to China. He is also associated with the founding of the martial arts of Shaolin kung fu and karate.

If you're familiar with the legends about this person (see previous posts), it's clear that he's a pretty formidable character and perhaps not someone you would ordinarily invite to a party or to Thanksgiving dinner.

It is a somewhat surprising fact of cultural history that the figure (literally) of Daruma would occupy a central place in Japanese popular culture, but there you have it. This wild monk has become a beloved figure not just in works of high arts, such as calligraphy, painting and sculpture, but as a toy, spinning top, fortune telling device, good luck charm, as a figure on kites, etc.

It is a common custom for someone who wants something to happen to buy a little Daruma doll like the one pictured above and color in one eye when trying to accomplish something. Once it happens, the other eye is colored it.

One common figure is the okiagari Daruma, a little egg-shaped figure with a weight in the bottom. When you push him over, he bounces right back, a good symbol of the Buddhist virtue of equanimity. There's a popular Japanese saying that expresses the idea behind it: "seven falls, eight rises." (That's pretty much how judo is learned, by the way.)

In other words, one good way of responding to adversity is to keep on getting up.

RECESSION ON THE MIND. Here's an item on the psychological effects of hard times.

ARACOMA MINE FIRE CASE. The widows of two miners who died at the Aracoma mine fire in Logan County WV in 2006 have opposed a plea deal which would keep prosecutors from taking the case higher up the Massey Energy corporate ladder.

ET, PHONE HOME. Here are the best bets for extraterrestrial life in our solar system.

This has nothing to do with today's post, except I thought you'd be interested in this POV and I couldn't find any other way to link it to you ...

That comment on the debtor mentality certainly does ring true. Thanks!