Medicine for the mind 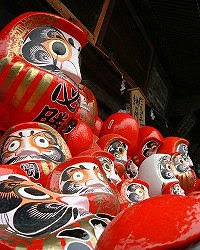 Daruma dolls for everyone! Image courtesy of wikipedia.

Lately Goat Rope has been about Buddhist lore, although you'll also find links and comments about current events. For the last week or so, the focus has been on legends about the figure of Bodhidharma or Daruma, who is said to have brought Zen from India to China and is also associated with the martial arts.

While the legends show Daruma as a pretty fierce figure, he has become a beloved figure in Japanese popular culture and his stylized image is featured in dolls, toys, kites, tops and many other forms.

As mentioned yesterday, one particularly popular form is the Daruma okiagari doll, which bounces back up when it has been pushed over, in accord with the popular saying, "seven falls, eight rises."

H. Neill McFarland in his book Daruma: The Founder of Zen in Japanese Art and Popular Culture explains the deeper meaning of both the toy and the saying this way:

The tactics thought to be implicit in this combination of image and adage, though also enigmatic, are of the essence of Asian philosophy and strategy, either for coping with life's vicissitudes or for practicing the martial arts. Maintain a low center of gravity. This enables one to rise up repeatedly, utilizing the momentum generated by the act of falling. Yield without breaking. Like the supple bamboo bending before the wind, one may practice the resistance of nonresistance (muteiko no teiko).

Thus, one who knows and ponders the cryptic little motto "Seven falls, eight rises" may view the bobbing motion of an okiagari Daruma as a symbolic enactment of life's experiences and contrasts--the ups and downs, the highs and lows, the successes and failures--and prepare to face them with perseverance and resilience. For this purpose, Daruma is said to be a kind of medicine for the mind (shinyaku).

STIMULATING. The economic recovery package unveiled by the US House yesterday actually does a lot of the things this blog has been screaming for over the past few years.

LESS WORK FOR MORE WORKERS. The number of involuntary part-time workers has doubled in the last year, according to the latest snapshot by the Economic Policy Institute.

FRIENDLY SKIES? It's hard to believe that all 155 passengers survived a flight that crash landed in the Hudson River.