What the peahen saw 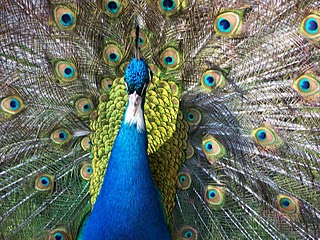 I hadn't planned on blogging so much about the animals on Goat Rope Farm this week, but then I ran into an interesting article about what female peahens look at when a peacock is displaying. For some time, people thought it was the eyelike features on their tails, but that doesn't seem to be much of a factor, at least when the peahen is fairly close to the male.

Based on this clever experiment that involves using little cameras to trace eye motion on the female, it may be the case that they pay attention to the size or width of the display. (Let it be noted that I resisted the temptation of making an adolescent remark that would have occurred to some immature minds after reading that sentence.)

As I write this, our peacock, Woodstock (he really looked like the Peanuts character when he was a baby) has started to lose his feathers. In a week or so, he will look like faded glory indeed. Meanwhile, it's my job to gather up the feathers so that the Spousal Unit can give them out as favors to her students this coming school year.

Darwin had a hard time with peacocks. The  males seem to put a huge amount of effort into growing and regrowing feathers, an annual event. But the feathers are so huge that they can get in the way of the survival of the animal, which could seem to go against the grain of natural selection.

I think peacocks keep score differently. My suspicion is that they prefer...shall we say...romantic success to longevity. And there are no doubt many who feel the same way.

CRUMBLING DREAMS. Here's a great essay by influential sociologist Robert Putnam on what happens when the economy leaves communities behind. Putnam, you may recall, helped put the idea of social capital front and center. Too bad it tends to fall apart when inequality grows and opportunity shrinks.

CLIMATE CHANGE AND VIOLENCE. There appears to be a link. Of course, WV's ruling class would tell us not to worry since there is no such thing, as is demonstrated by the fact that they get money from coal.