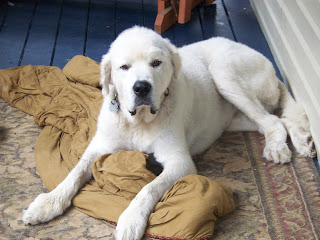 "Aristeia" is a great Greek word that often comes up when talking about heroic epics like the Iliad. It comes from the work aristos as in aristocrat and means the best. In the context of epic, it refers to a hero's best fight or most glorious day on the battlefield.

In the Iliad several characters had aristeias, including Diomedes, Patroclus, Hector and Achilles. A full scene begins with the hero strapping on his greeves or leg protection and his cuirass or upper body armor, grabbing his shield and sword and various accouterments of war and proceeding to open up a can on the enemy. Often, this can opening is preceded by a lengthy boast about the hero's lineage and deeds.

Arpad, our recently shaven Great Pyrenees (above) had his aristeia last night. Or really this morning.

Around 4 a.m., we were awakened by the unmistakable sound of chickens in distress. The Spousal Unit ran out with a flashlight and I followed with the 12 gauge. Arpad was already in the chicken house. The flashlight soon revealed that a possum had climbed the walls of the chicken coup to where they roost. It was not the best place for me to deploy my artillery.

Arpad only barked once for a change but tried his mightiest to climb the walls. He is a genial goof most of the time but is fiercely protective of the other animals on the farm.

I dislodged the possum from his perch with a hoe and Arpad swooped in like the angel of death. It was over in a flash. When it's my time to go, I hope I die as quickly as that possum.

He killed it a couple more times for good measure. If he had a chariot, he may well have dragged its body around Goat Rope Farm the way Achilles dragged Hector around Troy.

Sic semper possumus may well be his motto.

He's a good boy. I think of him as My Sweet Little Angel Baby From Jesus In Heaven. Possums, however, may have a different opinion.

We love Arpad. LOVE HIM.

I have opossums that live in my barn. Drives Pete crazy. That I know I've never lost any poultry to them. I've actually found them in the chicken house eating chicken feed!

Used to be one would let me pet him.

I think that where there is so much spilled feed,mis placed eggs and milk lying around it is sort of like a socialist utopia where crime is outdated because all have enough.