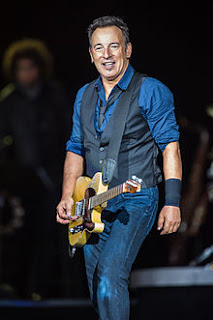 I feel like I've been living in Bruce Springsteen-land for the last few weeks. And not in a good way.

Point of clarification: I love his music and I even torture several of his songs on guitar (including Thunder Road, The Ghost of Tom Goad, and Youngstown).

What I'm trying to say is that I've been reliving the kinds of stories he has often sung about. About working people who once had a shot at a decent life in this country before being sold down the river by the Judas economy and our Judas ruling class.

Specifically, I'be been working on what I hope will eventually be a report on The State of Working West Virginia. I've worked on a similar report for the last 6 years, but this one is a little different. It looks back on a period of time in West Virginia when at least those lucky enough to have a job had a pretty decent chance.

Around 35 years ago, believe it or not, WV had a higher median wage than the USA. Its workers also had a greater chance of being union members and were more likely than most workers in this country  to have health insurance and pension benefits.

That didn't last long. Employment in coal mining collapsed in the 1980s, when the REAL war on coal miners happened--and the coal miners lost. That was also the decade of the Reagan (counter) revolution, when manufacturing tanked and we entered the period of globalization. It was also the period of rising conservatism, when the social contract was shredded and the priorities of the US government focused exclusively on making the rich richer.

This was the period in which WV's largest employer switched from Weirton Steel to Wal-Mart. Need I say more?

It's been painful for me to look down that road because I lived through it and hated and fought against every minute of it.I keep hoping it will end but it never does. Even when we win victories for poor and working people, which we have, they all seem threatened by a never ending onslaught.

Maybe that's why when I watch things like the series The Walking Dead, about a zombie apocalypse, it just reminds me of today's political world. It's not a horror film--it's just a statement of the facts: the dead (capital) devours the living (labor).

JUST ONE LINK. Here's a good one from the New Yorker about the need to raise the minimum wage--and change this Judas economy.
by El Cabrero