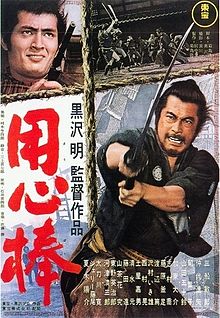 One might think that a film like Akira Kurosawa's 1961 samurai film Yojimbo would be right up my alley. And it kind of is.

But I have to admit that it put me to sleep three nights in a row--and I'm not proud of that fact. After major efforts, I finally finished it tonight.

I can't figure out why it put me out like a light. After all, as a martial artist, I must fess up to the fact that I have derived a great deal of  my politics and ethics from my idiosyncratic interpretation of the samurai code.

And I've been interested in Japanese culture for many years.

And the time period in which the film was set--the 1860s--was a fascinating time in Japanese history. The Tokugawa Shogunate was coming to an end. Rule by samurai types was pretty much over. Rule by capitalists was on the way. Money was taking the place of honor. Imperialism was soon to follow. This was the period in time the ruined the lives of many teachers in my lineage of Okinawan karate.

The film is about the breakdown of traditional restraints on behavior, something that has happened over and over again in place after place as the shoddy rule of mammon takes hold. One of the bad guys (whose hair looks Western) carries a gun. Say what you want about samurai, they had a distaste for firearms, considering them to be vulgar and dishonorable for a true bushi or warrior, a sentiment I kind of inherited as a karate-ka.

And I've always been fascinated by the somewhat romantic Japanese fascination with ronin, i.e. masterless samurai who wandered the land and were the subject of many exciting stories.

All of which is to say that I should have been glued to the screen but obviously wasn't. Which leads me to two possible conclusions: either I'm not getting enough sleep or I need to watch some zombie flicks. The jury is still out.

YOU MUST REMEMBER THIS. Dolphins do.

IT'S NOT ALL BAD NEWS. Childhood obesity is starting to go down in several states.